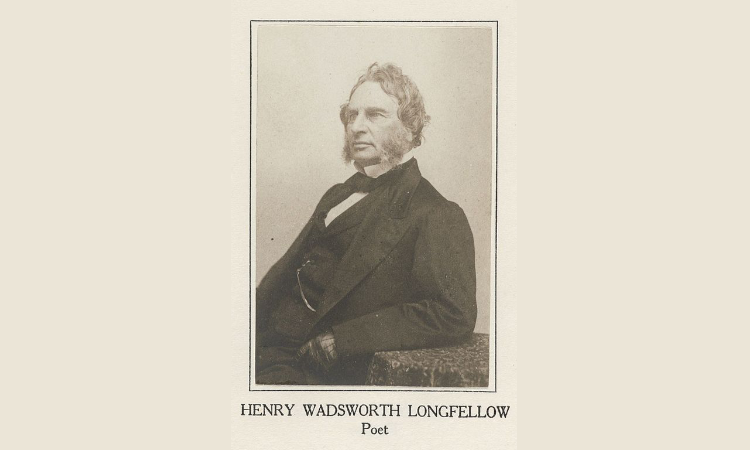 Have you ever stood up in front of your class and recited a poem? When your grandparents and great-grandparents were in school, they may have been required to recite this poem, “The Village Blacksmith,” by Henry Wadsworth Longfellow.

Under a spreading chestnut tree,
The village smithy stands;
The smith, a mighty man is he,
With large and sinewy hands;
And the muscles of his brawny arms
Are strong as iron bands.

Longfellow was born on February 27, 1807, in Portland, Maine. His poetry was very popular in the 19th century, and many of his poems are still familiar today. Have you ever read his poem about Paul Revere’s midnight ride on August 18, 1775?

Listen, my children, and you shall hear
Of the midnight ride of Paul Revere

“Paul Revere’s Ride” was published in Tales of a Wayside Inn in 1863. Paul Revere was the patriot who rode on horseback through the Massachusetts towns of Lexington and Concord warning of the upcoming British attack. Longfellow’s poems were also popular in Europe. After he died in 1882, he became the only American commemorated in the Poet’s Corner in England’s Westminster Abbey.

While Longfellow was a professor at Harvard University, he lived in Cambridge, Massachusetts, with his second wife, Fanny Appleton, (his first wife died) and his six children. One day, while he was at home, something happened that inspired him to write a poem about his children.

In “The Children’s Hour,” Longfellow wrote about an evening when his daughters tried to catch him by surprise. What do the first two verses of the poem have to do with the photograph on this page?

From my study I see in the lamplight,
Descending the broad hall stair,
Grave Alice, and laughing Allegra,
And Edith with golden hair.

A whisper, and then a silence:
Yet I know by their merry eyes
They are plotting and planning together
To take me by surprise.

Can you imagine his daughters playing on this staircase? Longfellow’s poems may seem old-fashioned now, but he was considered a “new poet” in his day. What would a modern-day poet write about you?