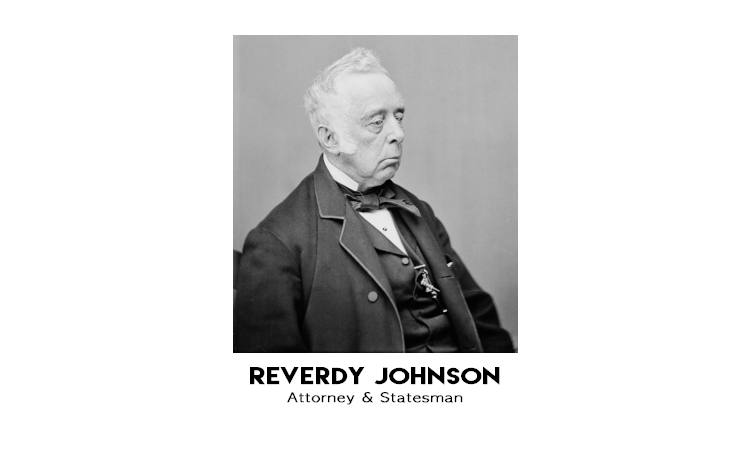 The state of Maryland was caught in the middle of the Civil War. It was a slave-holding state, but some of its leaders, such as attorney and statesman Reverdy Johnson, wanted to remain with the Union and not join the rest of the slave states in forming the Confederacy.

Born on May 21, 1796, in Annapolis, Maryland, Johnson represented Maryland in the Senate and served as attorney general under President Zachary Taylor. That’s him in the picture on the far right. Johnson took on several controversial roles because of his state’s position.

Although he personally opposed slavery, Johnson represented the slave-owning defendant in the 1857 Dred Scot case. The U.S. Supreme Court decided in this case that slaves were property and thus could not be citizens of the United States. The court’s decision increased antislavery sentiment in the North and fed the fire that sparked the Civil War. Despite the state’s support of slavery, Reverdy Johnson helped to keep Maryland in the Union during the war. This was of great strategic importance. If you look at the map on the next page, you might guess why.

Maryland’s position kept the District of Columbia, the capital of the Union, from being surrounded by Confederate states. However, because of strong Southern sentiments within the state, Marylanders lived under martial law during the war; that is, the Union military ruled the state. Several major Civil War battles took place within Maryland’s borders, including the Battle of Antietam, the single bloodiest day in American history. After the war, Reverdy Johnson argued for a less harsh treatment of the South by the North, again representing the split attitudes of his state. Do you know which states were slave states and which were not? Take a look at this map.