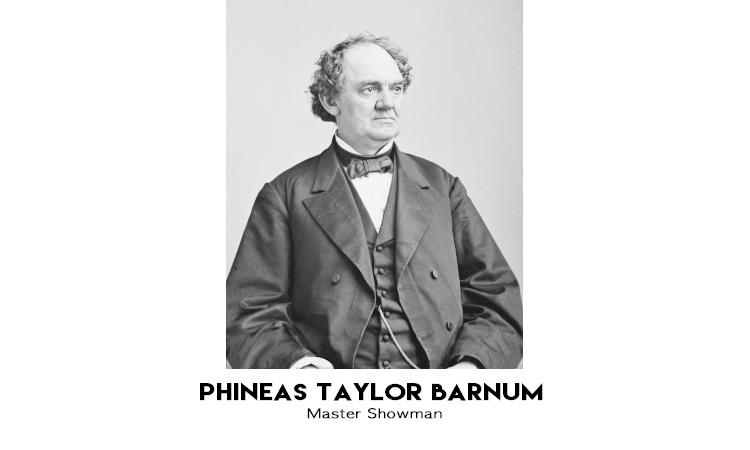 Have you ever been to the circus? What about a sideshow with bearded ladies, giant elephants, and “real” mermaids? P.T. Barnum would like you to see them all.

Born on July 5, 1810, in Bethel, Connecticut, Phineas Taylor Barnum became a master showman of both the genuine and the fantastic. Whether actual wonders or freakish fakes, Barnum’s attractions always drew crowds.

“Along in June P.T. Barnum would come to Waterbury, [Connecticut],” said a Barnum fan, Art Botsford, “We’d all go down on the morning train, and spend the day there. Shops [were] shut down tight. If they didn’t nobody would work anyway.”

Barnum was skilled at fooling his audiences. When he was only 25 years old, he passed off Joice Heth as George Washington’s 161-year-old nurse. You might not have been fooled by the hoax, but a lot of people came to see her. What would you pay to see the bearded Princess Ali?

In 1842, P.T. Barnum took over the American Museum in New York City. He brought oddities of all sorts to the museum. Among the most famous of his attractions was the fake FeeJee Mermaid, a cross between a human and a fish.

Barnum’s most famous and profitable exhibit was Charles Stratton, a 25-inch-tall man whom Barnum promoted as General Tom Thumb. The exhibit drew 20 million people. Barnum even took Stratton to the White House, where the two of them met President Abraham Lincoln.

P.T. Barnum was over 60 when he and James Bailey created the “Greatest Show on Earth.” You may know it as the Ringling Brothers Barnum and Bailey Circus. There are all kinds of circuses you can go to today, although it is unlikely you will ever find another FeeJee Mermaid.