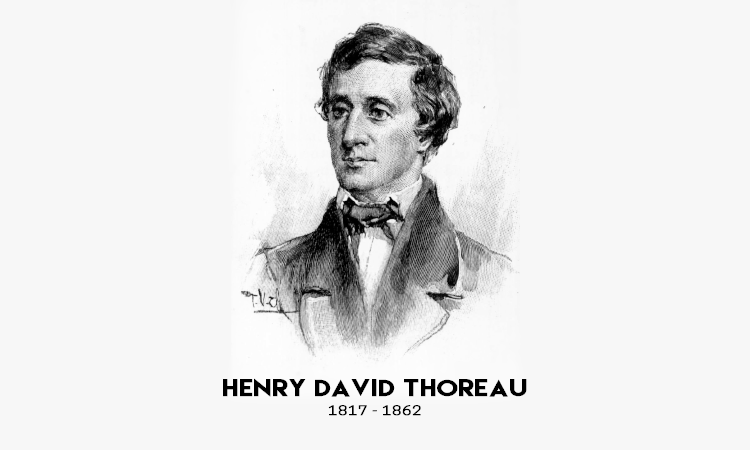 If Henry David Thoreau were alive today you might think he was a little odd or you might admire him. Born on July 12, 1817, in Concord, Massachusetts, Thoreau was a philosopher, naturalist, and writer who believed in living simply. In 1845 he put that belief to the test and moved to a hut on the edge of Walden Pond near Concord. For two years he lived with a minimum of possessions and limited his contact with people. What would you do for two years in a little hut away from people?

One of the things that Thoreau did was write a series of essays about his experiences, published in the book Walden, or, Life in the Woods. He also spent a night in jail for refusing to pay his voting tax. Thoreau withheld the tax as a protest against slavery and the war with Mexico, which he did not support. He wrote “Civil Disobedience” to explain his reasons. “Under a government which imprisons any unjustly,” he argued, “the true place for a just man is also a prison.” Thoreau, however, did more than just protest slavery by going to jail. What else do you think he did?

Thoreau also helped runaway slaves and defended those who fought for the end of slavery. Thoreau’s later years were spent outdoors, where he wrote about nature, like the scene shown in this photograph. He never made much money from his writing. When he died in 1862, many people in Concord considered him to be a failure. Thoreau may not have become rich, but he was a man who followed his beliefs. “If a man does not keep pace with his companions,” he wrote, “perhaps it is because he hears a different drummer. Let him step to the music which he hears, however measured or far away.”

Today people continue to be inspired by his writing and his actions. Do you think Thoreau was a failure?