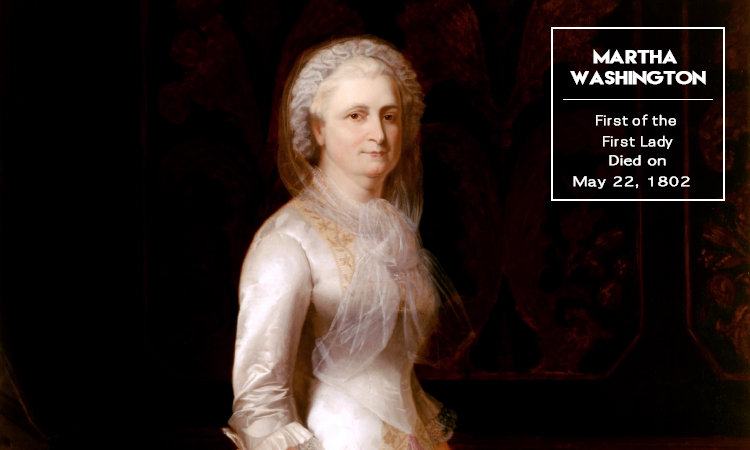 She was the first of first ladies, but what else do you know about Martha Dandridge Custis Washington? After an eventful and varied life, Martha Washington died on May 22, 1802, of a severe fever.

Martha Washington was 27 years old and a widowed mother of two when she married George Washington in 1759. She was also one of the wealthiest women in Virginia, having inherited some 15,000 acres of farmland from her deceased husband, Daniel Parke Custis. Her social life changed drastically once she married George. How do you think it was different?

Washington moved his new wife and newly-adopted stepchildren, Martha (“Patsy”) and John Parke (“Jacky”), to his home in Mount Vernon, Virginia, about 15 miles south of Washington, D.C. There the couple delighted in raising their children and entertaining Virginia society. Between 1768 and 1775, the Washingtons hosted more than 2,000 guests, some staying for extended periods. After her husband became president, entertaining became even more important in Martha Washington’s life. She hosted lavish parties in New York and Philadelphia, the temporary U.S. capitals, to match those given by the established governments of Europe. This was a bit exhausting for the first lady.

While the first lady was noted for her generosity and warmth as the nation’s premier hostess, she longed for her private life in Virginia. In a letter to a niece, she confided: “I think I am more like a state prisoner than anything else, there is certain bounds set for me which I must not depart from.” When George’s presidency ended, the Washingtons returned to Mount Vernon, and George passed away only two years later. After her death, Martha was buried beside him in a modest tomb on the estate. Could you play host for a country the way Martha Washington did? What do you know about other first ladies?