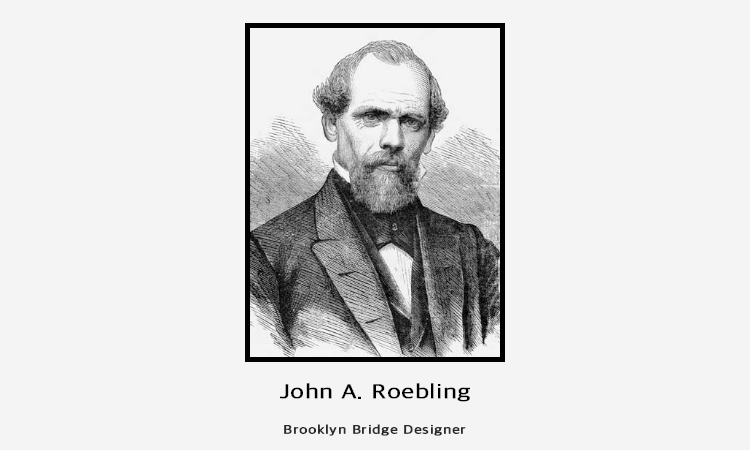 Born in Prussia on June 12, 1806, John A. Roebling is best known as the designer and civil engineer for the Brooklyn Bridge in New York City, which was completed in 1883. With a main span of 1,596 feet long, the structure was the longest suspension bridge in the world for many years. Roebling also invented a way to manufacture the twisted wire cables that made the bridge possible.

Have you ever been to New York City? If you have, you probably know that the Brooklyn Bridge crosses the East River, connecting the boroughs of Manhattan and Brooklyn.

When a bridge is built over water, how do the workers stay dry? Workers went about 78 feet underwater to dig the supports for the Brooklyn Bridge. They did not get wet because pressurized caissons (watertight structures) were sunk under the water giving the men a dry place to work.

When the Brooklyn Bridge was opened you had to pay three cents to cross it until it was paid for. When they opened the bridge everybody went to see it…It took them 14 years to build the Brooklyn bridge.

It doesn’t sound like a lot of money today, but back then, the three cent toll helped the city pay for the construction. Now you can cross the Brooklyn Bridge for free. Sadly, John A. Roebling did not live to see the completion of his greatest achievement. He died from tetanus contracted in an accident during construction of the bridge. But every day since it was completed, people have used and appreciated the bridge Roebling designed.