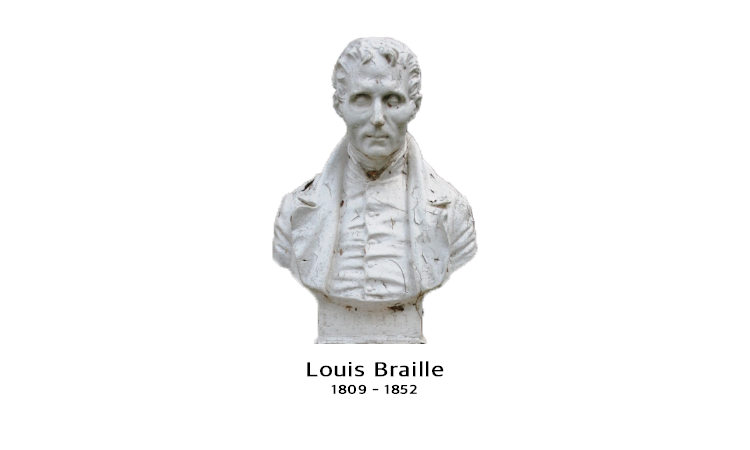 Louis Braille was born on January 4, 1809, in a small town called Coupvray, France. Louis and his family lived in a small house. His father worked as a master harness maker. He made saddles for horses.

When Louis was three years old, he blinded one eye in an accident in his father’s tool shop. In a short time, he became blind in the other eye as well. He then “saw” the world through his fingers and ears.

Blind children at that time had few opportunities to learn, but the local priest became Louis’s teacher. Louis did so well in school that at age ten he traveled to Paris to study at the Royal Institute for Blind Youth. He liked his classes, especially music lessons, but there were no ways to take notes, write, or even read music. While there, Louis became interested in making a written alphabet that would help the blind to read. At fifteen, he completed a variation of the alphabet that uses raised dots to make letters.

The braille alphabet uses a system based on dots in cells. A basic cell is a group of six dots, arranged three down and two across. A cell represents different letters and numbers depending on how the dots are organized. It is easy to feel under one fingertip. Louis spent the rest of his life teaching and promoting his systems to help the blind communicate.

During his lifetime, only a small group of people knew braille. After Louis died in 1852, the popularity of the braille alphabet spread to other countries. Helen Keller, the great American writer and activist, was blind and deaf. She read braille. She compared Louis Braille work to the invention of modern printing.