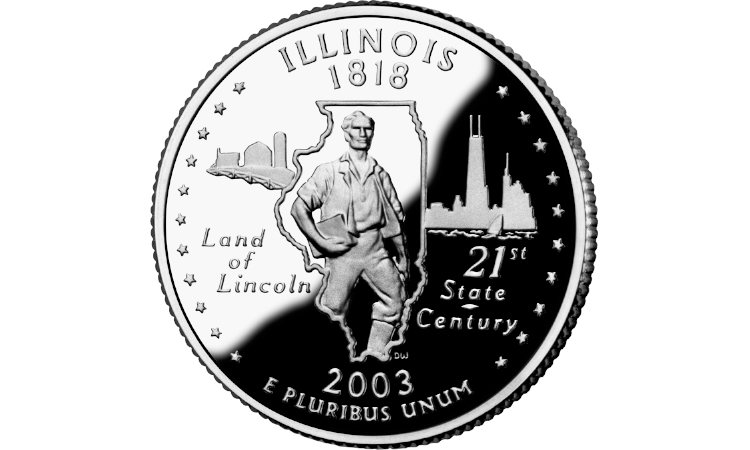 December 3, 1818
Illinois Entered the Union as the 21st State

Which state is home to bears, bulls, blues, great pizza, and Abraham Lincoln? The state of Illinois entered the Union on December 3, 1818. The 21st state takes its name from Native American tribes of the area. In Algonquian, “Illinois” means “tribe of superior men.” Illinois can boast of many outstanding citizens in its long history, going back to a sophisticated, prehistoric society in the southwestern part of the state that had developed limited agriculture.

The French claimed, explored, and settled Illinois in the 1600s. They passed the territory onto Great Britain in 1763, and in 1783, the United States acquired the land. Nicknamed “Land of Lincoln,” the state is very proud of its famous son, Abraham Lincoln, who came to Illinois in 1830. After playing a major role in moving the state capital from Vandalia to Springfield, Lincoln married socially prominent resident Mary Todd, and settled into his new home to practice law and build a political career that would bring him the presidency in 1861. Lincoln was not the only famous citizen of Illinois.

The city of Chicago became one of the three largest cities in the U.S. because inventors such as John Deere, with his steel plow, and Cyrus Hall McCormick, with his wheat reaper, set up manufacturing plants in the “Windy City.” Rand McNally of Chicago became the world’s largest mapmaking company by 1880.

Illinois, particularly Chicago, has many “firsts” and “biggests,” like Sears Tower, the tallest building in the United States, and African American Daniel Hale Williams, who performed the first open-heart surgery in 1893. He also helped found Provident Hospital in Chicago in 1891 as an interracial institution where black doctors and nurses, denied access to white institutions, could receive medical training, and where members of Chicago’s growing black community could receive care. What other famous events happened in Chicago? What other people do you know from the great state of Illinois?