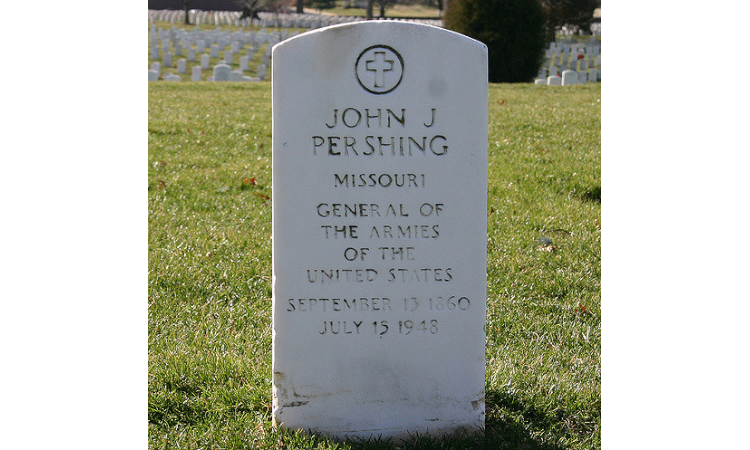 John J. Pershing fought the American Indians, chased Pancho Villa into Mexico, and molded the American troops into a fighting army during World War I. When he died on July 15, 1948, he was given a hero’s burial at Arlington National Cemetery.

Born in Laclede, Missouri, on September 13, 1860, Pershing was the oldest of six children. His mother taught him at home, where he developed a love of learning. How did Pershing become a military hero?

After graduating from the United States Military Academy at West Point, Pershing commanded the 6th Cavalry Regiment in the West, where he participated in the campaigns against the Apache and Sioux Indians.
When a new law authorized the U.S. Army to form cavalry and infantry regiments of black soldiers, Pershing became first lieutenant of the 10th Cavalry Regiment in Montana, one of several segregated regiments. The African American troops of the 9th and 10th Cavalry Divisions played a prominent role in the battles of Santiago and San Juan Hill during the Spanish-American War in 1898. Pershing was awarded a Silver Star Citation for gallantry in both those battles, but he had yet to meet the notorious Pancho Villa.

President Wilson sent Pershing after Pancho Villa, the Mexican bandit who had been making murderous raids across the border into the United States. For nine months, Pershing and his troops chased the elusive Villa through Mexico. Although Pershing never caught Villa, Wilson was impressed with the way the general handled his command in a foreign country.

When the U.S. entered World War I, Wilson appointed Pershing commander of the American Expeditionary Forces to Europe. Before his death in 1948, Pershing’s brilliant military career earned him the title of General of the Armies of the United States. He was the first general awarded the title since George Washington.