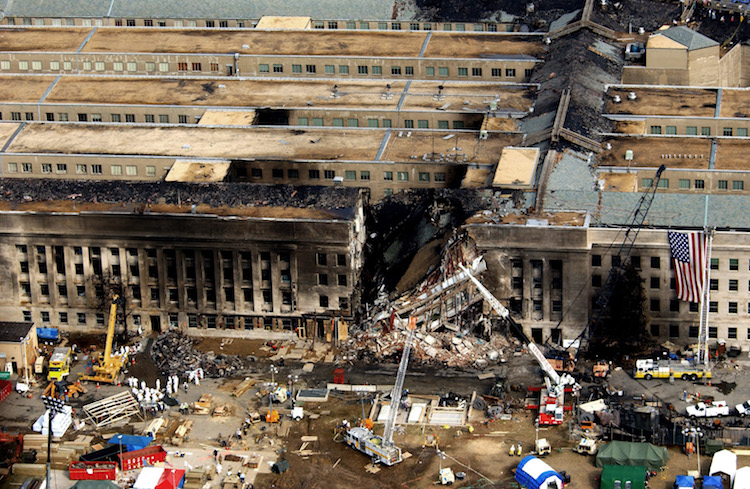 Aerial view of the Pentagon Building located in Washington, District of Columbia (DC), showing emergency crews responding to the destruction caused when a high-jacked commercial jetliner crashed into the southwest corner of the building, during the 9/11 terrorists attacks.

September 11, 2001, is a day that no one will forget. It began as a crystal clear, blue-sky Tuesday. As mid-morning approached, however, the brightness quickly turned into tragedy. American Airlines Flight 11 left Boston, Massachusetts, at 8 a.m., bound for Los Angeles, California. At 8:14 a.m., United Airlines Flight 175 also left Boston for Los Angeles. At 8:45 a.m., just 45 minutes after taking off, the American jet crashed into the World Trade Center’s North Tower in New York City. At 9:03 a.m., the United jet crashed into the World Trade Center’s South Tower. By 10:30 a.m. both towers had collapsed completely from the damage.

As people watched these events unfold on television, they were frightened and bewildered. It quickly became obvious that the United States was under attack and that the airliners were being used as weapons by hijackers.

The attack was not over. At 8:21 a.m. American Flight 77 departed Dulles International Airport, just outside Washington, D.C., for Los Angeles. At 9:41 a.m., this plane crashed into the Pentagon in Arlington, Virginia, which is just across the Potomac River from Washington and the White House.

United Flight 93 had left Newark, N.J., for San Francisco, California, at 8:41 a.m. As news of the Pentagon attack became known, it was clear that one more flight was in trouble. Flight 93 suddenly made a sharp U-turn over Cleveland, Ohio, and started flying east toward Washington. Passengers had learned via cell phone about what happened in New York and at the Pentagon. Believing that their plane was destined for Washington with the White House as its target, several passengers decided to overpower the hijackers who were trying to take over the plane. At 10:07 a.m., the plane crashed in a field 80 miles southeast of Pittsburgh, Pennsylvania, after a valiant struggle.

More than 3,000 people died in these four attacks.

After a few days, when air traffic was allowed to resume, life in America tried to get back to “normal.” However, after September 11, many things had changed, including security at airports and other public places. How has your life changed since September 11? How do think the United States and the world are different?