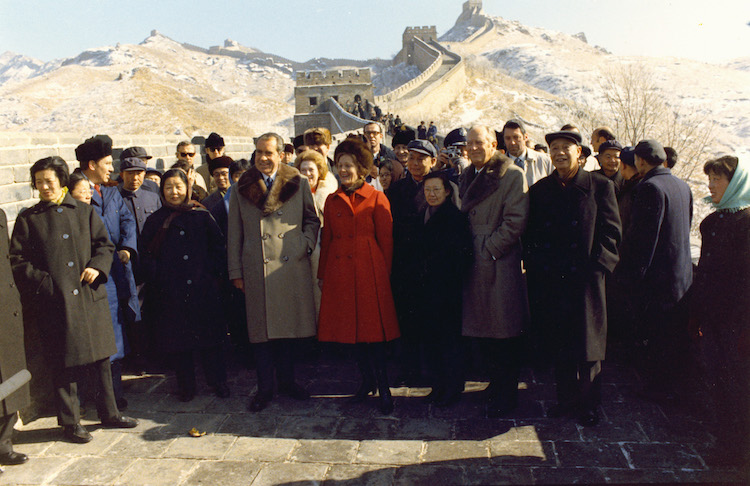 Look at the tags on your clothes or your backpack and see where they were made. There’s a chance it was China. Today, the U.S. has an open-trade policy with China, which means goods are traded freely between the two countries, but it wasn’t always this way. On February 21, 1972, President Richard M. Nixon arrived in China for an official trip. He was the first U.S. president to visit the People’s Republic of China since it was established in 1949. This was an important event because the U.S. was seeking to improve relations with a Communist country during the Cold War. What sorts of issues do you think Nixon discussed?

On his visit to China, Nixon met with Chinese Premier Chou En-Lai. The two leaders agreed to expand cultural contacts between their two nations. Nixon also established plans for a permanent U.S. trade mission in China.

The U.S. had become first interested in having political and economic ties with China in the 19th century. Japan attacked China in 1894-1895. As a result, Russia, France, Germany, and Great Britain wanted to protect their interests in China by carving up the country and each controlling one area. How do you think the U.S. felt about this?

The U.S. wanted to prevent the division and control of China by Russia, France, Germany, and Great Britain. In 1899 and 1900, the U.S. established the Open Door Policy, which ensured that all nations had equal trading privileges with China. The U.S. was able to make this policy because it had become an important power in the Pacific after its victory in the Spanish-American War in 1898. In this film, made by Thomas Edison’s film company, you can see a reenactment of a battle from the Spanish-American War. Does it look authentic?