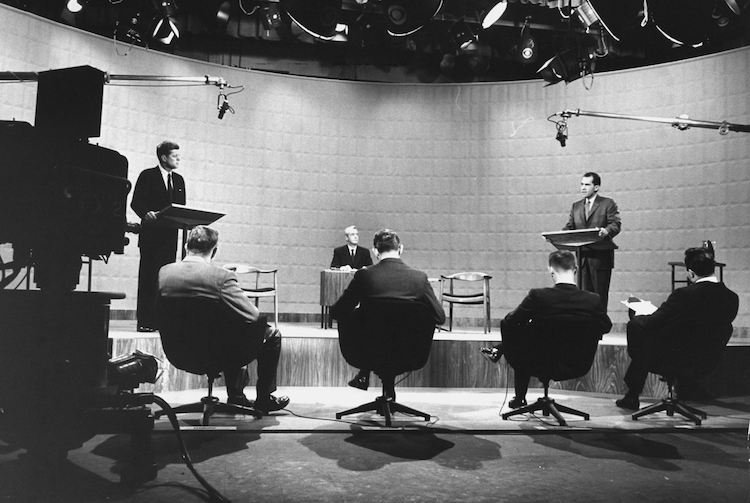 October 21, 1960
The Great Debates of Nixon and Kennedy

Do you watch any election coverage on TV? On October 21, 1960, American viewers were riveted to their television sets for the broadcast of the fourth and final debate between Vice President Richard M. Nixon, the Republican presidential candidate, and Senator John F. Kennedy, the Democratic candidate. Their first debate, a month earlier, had covered domestic issues. The second and third debates featured a news panel asking the candidates questions. The third debate also used television technology in a completely new way.

The third debate was the first genuine “electronic debate.” The two candidates faced off from opposite coasts–Kennedy spoke from a television studio in New York and Nixon from Los Angeles. The fourth debate focused on foreign policy issues. Were the “Great Debates” significant? Pollsters estimated that approximately 3.4 million voters made their choice of party candidate on the basis of the debates alone. The milestone event thrust the broadcasting media into a central role in the American political process.

In 1952, the presidential campaign was televised nationwide for the first time. The public avidly followed the television coverage of the campaign, rating television as the most informative of the media available to them. Before television, radio was used to broadcast political speeches. Calvin Coolidge used this technology in 1924, and Franklin Roosevelt, who was president from 1933 until 1945, captured the attention of Americans through his radio-broadcast “fireside chats.” Despite criticism that television increases the cost of political campaigns, it plays an important role in bringing presidential debates to the people. Have you watched any political debates?