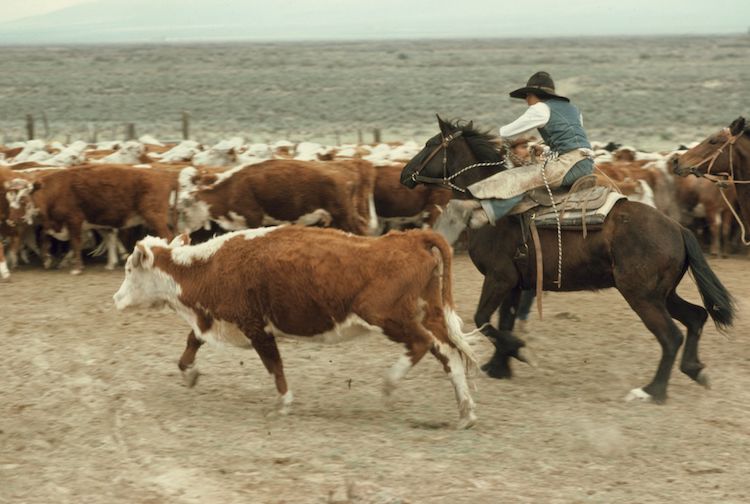 On the Ninety-Six Ranch in Nevada, cowboys are known as buckaroos. At roundup time on the cattle ranch, a buckaroo’s day starts at 5:30 in the morning, and on October 7, 1979, the last day of that year’s fall roundup, the morning was no different.

After breakfast, the buckaroos rode the range, gathering up the last of the cattle that had been grazing over the summer in the Santa Rosa Mountains. Unlike the cattle drives you may have seen in the movies, these buckaroos did not have to sleep on the ground with only a blanket of stars to keep them warm.

Along the trail, the buckaroos stayed in camps near a spring or stream. Each camp had a cabin with a wood-burning cook stove and bunks. Outside was a fenced-in area to hold a string of horses, a place to store hay, and a corral. The buckaroos did more than just play cards to entertain themselves; they also ate plenty of good food and tossed around a Frisbee.

It took three days to round up the 2,000 cattle and three more days for the trail drive back to the ranch. The experienced cowhands used a few different tricks to gather the cattle and keep them moving back toward the ranch.

To get the herd going in the right direction, the buckaroos rode to a site above the cattle, and then headed toward them down the hill. To drive the cattle from a thicket, they banged on tin cans or shook cans full of stones, always being careful not to cause a stampede.

At the end of the round up, any calves born during the summer were branded, and some of the cattle were sold. The remaining herd was kept in nearby pastures during the winter. In the spring, the new calves would be branded and turned out with the rest of the cattle to grow fat on the summer grass in the mountains. When fall rolls around again, the buckaroos head out after them once again.