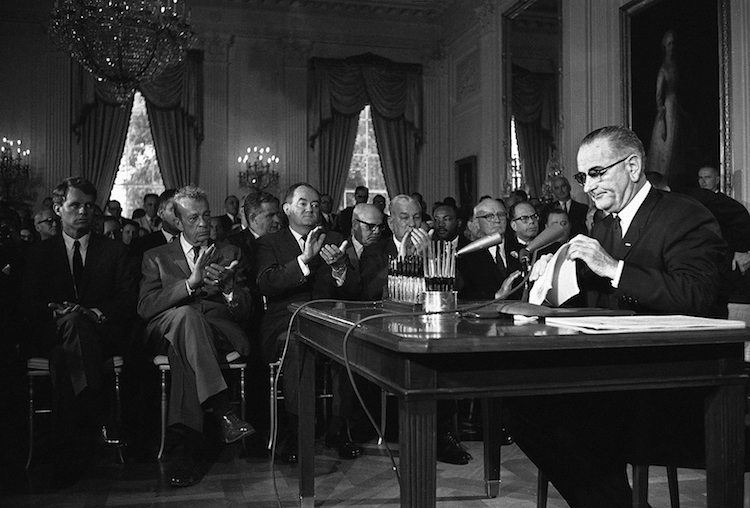 President Lyndon B. Johnson is applauded as he finished his speech in the White House in Washington on July 2, 1964, over a radio-TV network prior to signing the 1964 Civil Rights Bill. Front row from left: Atty. Gen. Robert F. Kennedy, Sen. Everett M. Dirksen, R-Ill; Sen. Hubert H. Humphrey, D-Minn

Imagine that you are finally old enough to vote in your first election. But, do you have enough money? Money, to vote? Not long ago, citizens in some states had to pay a fee to vote in a national election. This fee was called a poll tax. On January 23, 1964, the United States ratified the 24th Amendment to the Constitution, prohibiting any poll tax in elections for federal officials.

Many Southern states adopted a poll tax in the late 1800s. This meant that even though the 15th Amendment gave former slaves the right to vote, many poor people, both blacks and whites, did not have enough money to vote.

“Do you know I’ve never voted in my life, never been able to exercise my right as a citizen because of the poll tax?”
“Mr. Trout” to Mr. Pike, interviewer, Atlanta, Georgia. American Life Histories, 1936 – 1940.

More than 20 years after “Mr. Trout” spoke those words, the poll tax was abolished. At the ceremony in 1964 formalizing the 24th Amendment, President Lyndon Johnson noted that: “There can be no one too poor to vote.” Thanks to the 24th Amendment, the right of all U.S. citizens to freely cast their votes has been secured.