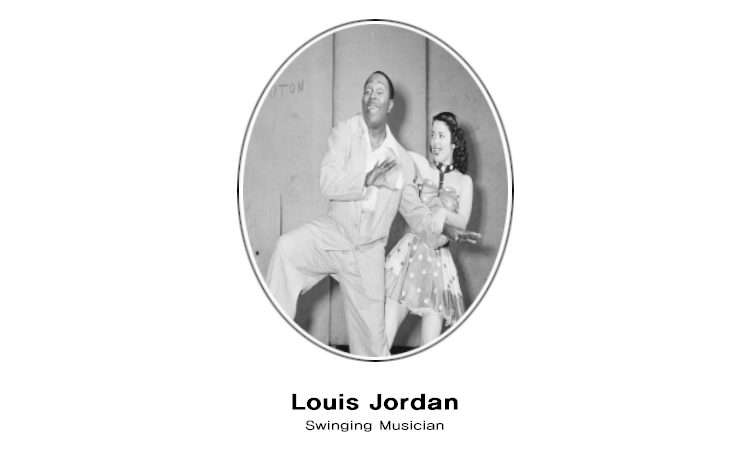 Jump, boogie, and let the good times roll! Louis Jordan was a swinging musician who played “jazz with a broad grin.” On December 21, 1946, Jordan’s single, “Let the Good Times Roll,” debuted on the rhythm-and-blues (R&B) charts. Over the next 22 weeks, the recording stayed near the top of the chart, occupying the Number 2 spot for four weeks.

Do you play a musical instrument? Louis Jordan started playing saxophone at the age of 7. As a teenager, he toured with the famed Rabbit Foot Minstrels and backed blues singers, including Bessie Smith. What was next for this talented musician?

By 1938, Jordan headed his own band–Louis Jordan and His Tympany Five. His goal was to create music that appealed to all people. From 1943 until 1950, his singles topped the R&B chart more than 25 percent of the time. Fifteen of those hits crossed over to the pop charts.

Jordan combined musical innovation with humor and jive talk. “Ain’t Nobody Here But Us Chickens” ranked Number 1 on the R&B charts for 17 weeks. This excellent saxophonist and talented entertainer appeared in films and recorded with prominent artists, including Louis Armstrong, Bing Crosby, and Ella Fitzgerald. Unfortunately, the next decade had something else in store for the bandleader.

While Jordan introduced jump blues and boogie-woogie to the masses in the 1940s, his career was not successful in the 1950s. Repeated attempts to stage a comeback failed.

If you’ve never heard a Louis Jordan recording, you have certainly heard his style. Jordan influenced a wide range of performers, most notably Chuck Berry, Ray Charles, and Bill Haley. Among many others who have played his music are Woody Herman, Muddy Waters, B. B. King, and Eric Clapton. Jordan was inducted into the Rock and Roll Hall of Fame in Cleveland, Ohio, 1987, 12 years after he died.