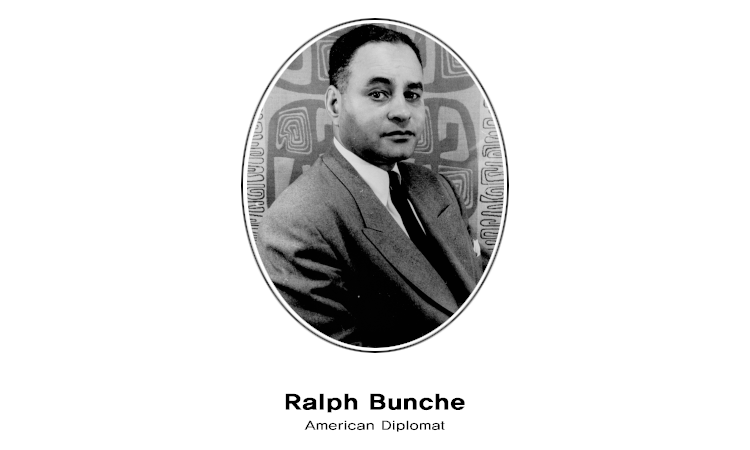 Have you ever tried to create peace between two fighting people? It can be a delicate process, but American diplomat Ralph Bunche had a knack for negotiation, along with excellent training and experience. Bunche died on December 9, 1971, in New York City, but not before many political and personal accomplishments, like winning the 1950 Nobel Peace Prize. His career as diplomat, mediator, educator, writer, social theorist, and political leader began after his education at Harvard University.

Bunche earned graduate degrees in both government and international relations. In 1928, he established a department of political science at Howard University in Washington, D.C. Between 1938 and 1940, Bunche collaborated on a monumental study of U.S. race relations, which presented the theory that “poverty breeds poverty.” With World War II, Bunche worked for the War Department and the State Department. He played an important role in the early planning for the United Nations, the organization he served for the rest of his career, with some remarkable achievements.

When the chief United Nations mediator of the Palestine mission was suddenly assassinated in 1948, Ralph Bunche took over and successfully negotiated an end to the first Arab-Israeli War. His role in this 1949 truce won him the Nobel Peace Prize. He later oversaw U.N. peacekeeping missions to the Suez Canal, Congo, and Cyprus. He served as a board member for the National Association for the Advancement of Colored People (NAACP) for 22 years. In the last decade of his life, he actively supported the civil rights movements, even marching in Selma and Montgomery, Alabama, when he was 61 years old. All his life, Bunche was a man who negotiated for peace.