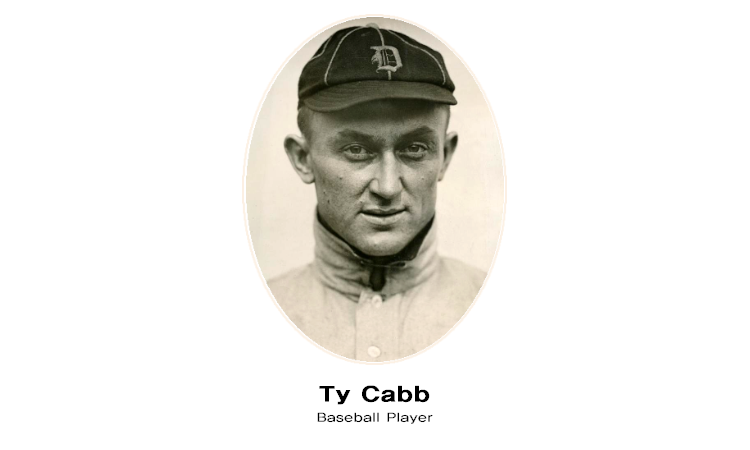 Who do you think are the greatest baseball players of all time? If it were 1927, you might have named Babe Ruth or Ty Cobb. On July 18, 1927, Cobb recorded his 4,000th career hit. Can you imagine getting 4,000 hits? Cobb is considered by many to be the greatest offensive player in baseball history. He started his professional baseball career when he was 18 years old. For 22 out of 24 seasons, he played with the Detroit Tigers. In this baseball card from 1912, Cobb is stealing third base.

Ty Cobb’s nickname was the “Georgia Peach” because he was born in Narrows, Georgia. Besides being a great player, Cobb was a fierce competitor. He stole home 50 times, won 12 batting average titles, and managed the Detroit Tigers for six seasons while also playing centerfield. There’s some debate about the exact figure for his lifetime batting average, but for 23 years he batted at least .300. In this photo, there are two of the greatest hitters in baseball–Ty Cobb and Joe Jackson. Traded to the White Sox in 1915, Jackson averaged .356. Both players were involved in scandal. Do you know what they did?

Joe Jackson was banned from baseball after being involved in a conspiracy to “throw” (fix the outcome of) the World Series in 1919, known as the Black Sox Scandal. Cobb was allowed to resign from professional baseball in 1926 after supposedly being involved in gambling violations. Later, baseball’s first commissioner, Judge Kenesaw Mountain Landis, cleared Cobb of charges and allowed him to play again. Cobb, a left-handed batter who threw with his right hand, was elected to the Baseball Hall of Fame in 1936. Cobb’s autobiography, titled My Life in Baseball, was published in 1961.