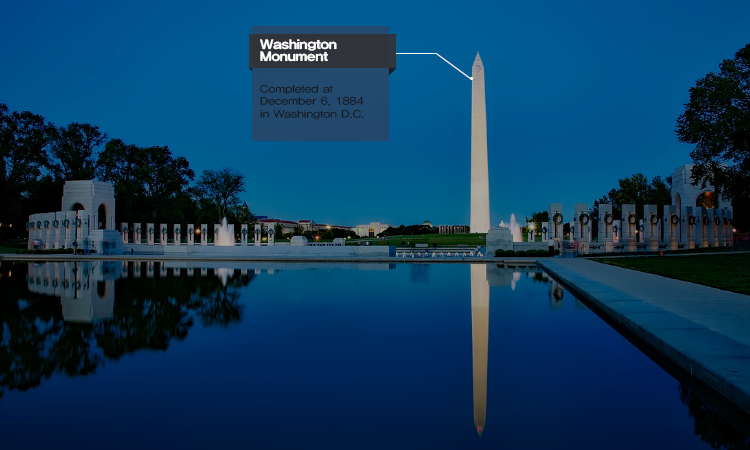 December 6, 1884
The Washington Monument was Completed

What do you know about the structure in this photo? In a city of monuments, it is referred to as “The Monument.” It is, of course, the Washington Monument in Washington, D.C., completed on December 6, 1884. The focal point of the National Mall, it is the background for concerts and fireworks and dominates the capital’s skyline.

How long did it take to complete the 555-foot Egyptian obelisk, topped with a 3,300-pound marble capstone and a 9-inch pyramid of cast aluminum? That question is harder than it may seem.

The Washington National Monument Society laid the monument’s cornerstone on Independence Day, 1848, 36 years before completion. But when the obelisk was a height of about 156 feet, the Society lost support and funding. The monument stood incomplete and untouched for 20 years. Finally, in 1876, President Ulysses S. Grant authorized the U.S. Army Corps of Engineers to finish the project. When fully constructed, it was the world’s tallest structure. Today, the approximately 36,000-stacked blocks of granite and marble compose the world’s tallest freestanding masonry structure. But there’s even more trivia to top that!

That 9-inch aluminum pyramid, which completes the top of the structure as it narrows to a point, is 100-ounces of solid aluminum, part of the monument’s lightning protection system. In the 1880s, aluminum was a rare metal, selling for $1.10 per ounce and used primarily for jewelry. The pyramid was the largest piece of aluminum of its day and was such a novelty that it was displayed at Tiffany’s jewelry store in New York before it was placed at the top. Last, if you go to visit the Washington Monument, you will have a spectacular panoramic view from the observation deck because, by government mandate, it will always be the tallest structure in Washington. Now that’s some monumental trivia!