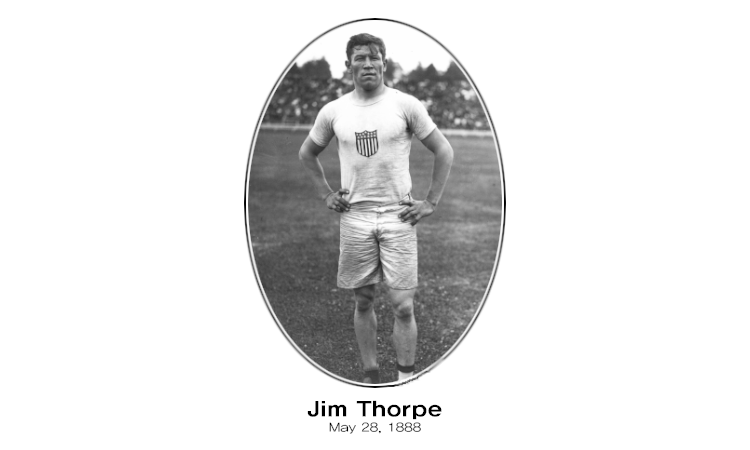 Do you play multiple sports? If you admire great athletes like Deion Sanders that do, meet world-class athlete Jim Thorpe.

Thorpe was a Native American who excelled at every sport he ever played. Born in a one-room cabin in Indian Territory (present-day Oklahoma) on May 28, 1888, Thorpe was named the greatest football player and the greatest American athlete of the first half of the century by American sports writers and broadcasters in 1950. The great-great-grandson of an Indian warrior and athlete, Thorpe attended the Carlisle Indian Industrial School in Pennsylvania. In 1909, he left school to play baseball for two years before returning to play football, baseball, and basketball, and train for the 1912 Stockholm Olympics in track. How do you think he did?

Thorpe won gold medals in both the decathlon and pentathlon events, but when a reporter revealed his two years of semi-professional baseball, he was stripped of his medals. The story doesn’t end there.

In his last college season, Thorpe scored 198 points and was voted first-string, All-American halfback. Once out of school, he signed to play baseball with the National League Champion New York Giants. From 1913 to 1929, he usually switched sports each season from baseball to football, which he played professionally until he was 41 years old.

Football was not as popular as baseball back then, but Thorpe helped make it the wildly popular sport it is today and became the first president of the new American Professional Football Association (later the National Football League–NFL). As his professional sports career drew to a close, the Depression proved a hard time for Thorpe. He held a variety of jobs, but he could not afford to buy a ticket to the 1932 Olympic games. When he was invited to sit in the presidential box, a crowd of 105,000 stood to cheer him. After his death, Thorpe was also given back his Olympic medals and his name was reentered into the record books. Can you name other multiple-sports stars? Ask your family if they have heard of Jim Thorpe.