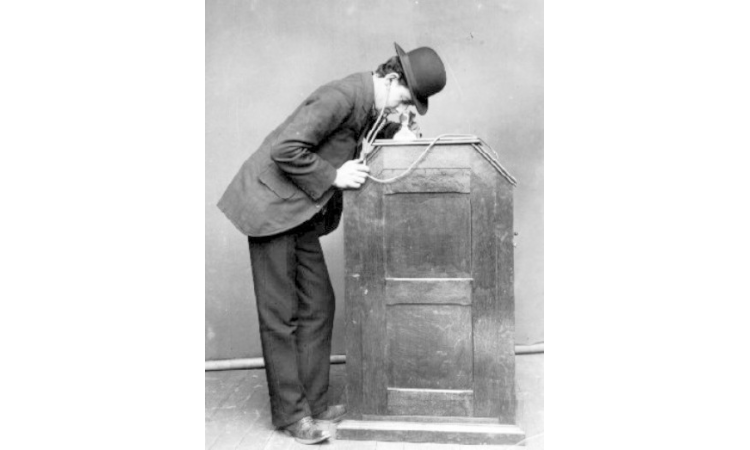 When his assistant W.K.L. Dickson invented the motion picture viewer, Edison initially considered it an insignificant toy. However, it turned out to be an immediate success. Edison had hoped the invention would boost sales of his record player, the phonograph, but he was unable to match sound with pictures. Therefore, he directed the creation of the kinetoscope, a device for viewing moving pictures without sound. Edison patented this invention on August 31, 1887. Most of those early kinetoscope films disintegrated or burned because of the film’s nitrate (acidic) base. But luckily, he had made paper copies of the film’s individual frames, called “contact prints.” So now you can view one of Edison’s first-ever moving pictures, commonly called “Fred Ott’s Sneeze.”

All the earliest movies were short because their creators, like Edison, didn’t think people would stand the “flickers” for more than 10 minutes. The kinetoscope, which could only be viewed by one person at a time, was soon replaced by screen projectors, which showed the movie to a whole room of people at once.

Wanting to film a great number of motion pictures, Edison and his assistant W.K.L. Dickson designed the Black Maria, the first movie studio, completed in 1893. Its name is the slang for a police paddy wagon, which the studio was said to resemble. Could you watch the “flickers” for more than 10 minutes?

Edison produced between 200 and 300 films at the Black Maria. You can watch this film, “Three Acrobats,” produced in the Black Maria in 1899. The motion picture industry has come a long way since these early films. What do you think Edison would say if he saw “Star Wars” or “Titanic”?