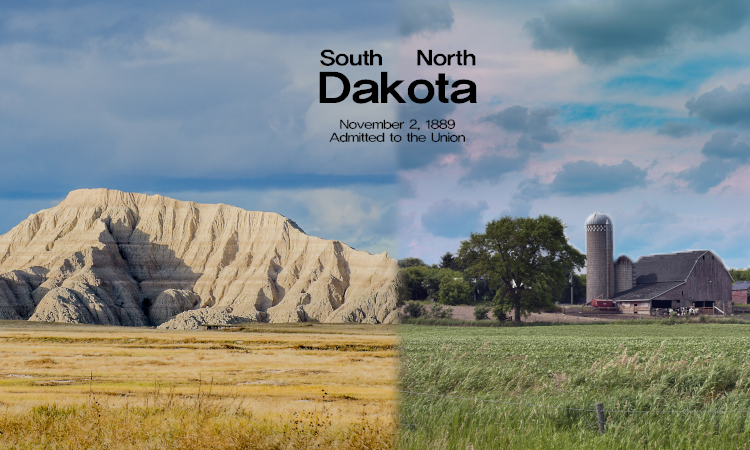 November 2, 1889
North Dakota and South Dakota were Admitted to the Union

After controversy over the location of a capital, the Dakota Territory was split in two and divided into North and South in 1889. Later that year, on November 2, North Dakota and South Dakota were admitted to the Union as the 39th and 40th states. This vast territory was one of the last American regions to be settled.

The first European explorers entered the region in 1742. At that time, at least eight Native American tribes populated the area, including the Crow, Cheyenne, and Dakota (Santee Sioux). The Native influence still characterizes many parts of the states.

Other than fur trappers, explorers didn’t venture much into the Dakotas until the land came under the possession of the United States with the 1803 Louisiana Purchase. The Lewis and Clark expedition spent the winter in present-day North Dakota in 1804. With the 1832 arrival of the steamboat and the 1862 creation of the Homestead Act, a few people migrated to the area, but tension between the settlers and the Sioux discouraged many. It was the 1874 discovery of gold that brought prospectors pouring into the sacred Black Hills of the Sioux Reservation. That meant trouble.

After an armed resistance, the Sioux surrendered the Black Hills to the U.S. in 1877. By 1881, even the powerful chief Sitting Bull had surrendered. The end of the “Indian crisis” and the completion of the Northern Pacific Railway brought more than 100,000 settlers between 1879 and 1886. These new citizens became divided over the location of the capital. Northerners named Bismarck their capital in 1883, while Southerners created their own constitution that year, selecting Pierre as their capital. Congress did not push the matter. Instead, Congress passed a law that officially divided the territory before declaring both North Dakota and South Dakota states of the Union.