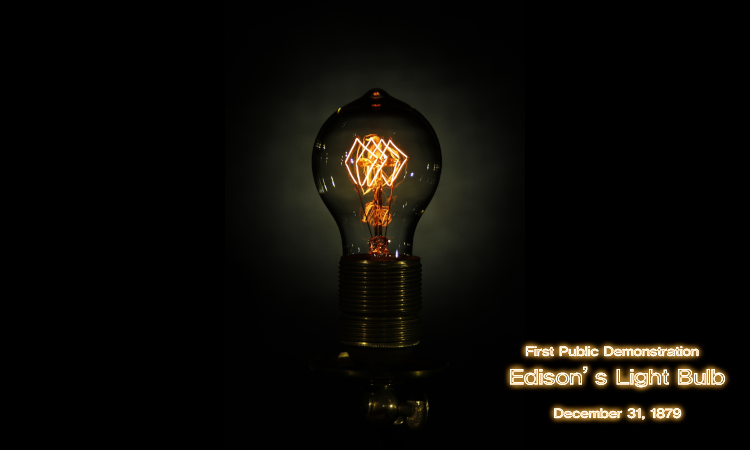 Can you imagine what life was like before you could simply flip a switch and turn on a light? How would not having electric light affect the way you live your life? In the 1870s, many inventors were working on creating lighting devices, but until Edison became involved, what existed was electric arc lighting. This kind of lighting system was one in which lights were connected in a series circuit, so if one failed, the whole circuit failed. Edison boasted that he would create a safe, reliable, and inexpensive electric light that would replace gaslight.

On December 31, 1879, after years of work and thousands of experiments, Edison gave the first public demonstration of the incandescent light bulb at his laboratory in Menlo Park, New Jersey. An incandescent light has a thread-like object, or filament, that gives off light when heated to incandescence (hot enough to emit light) by an electric current.

Edison was able to spend so much time on this invention because, thanks to his reputation as a successful inventor, he had the support of some leading financiers of the day. J.P. Morgan and the Vanderbilts established the Edison Light Company and advanced Edison $30,000 for research and development.

Edison did not work on creating the incandescent electric light alone. He was assisted by Francis Upton, a 26-year-old graduate of Princeton University with a master’s degree in science. Upton provided the mathematical and theoretical expertise that Edison lacked. In October 1879, they produced a bulb with a platinum filament. But platinum was too expensive, so instead they found that a carbon filament provided a good light at a cheaper price. Although there were problems with the early incandescent lighting systems for years, Edison’s reputation as the world’s greatest inventor was firmly established.