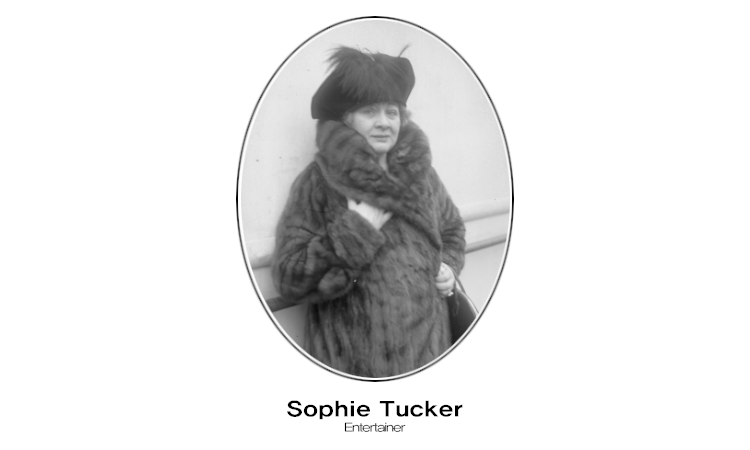 Have you ever seen Bette Midler, Roseanne, or Joan Rivers perform? These women all have a loud, funny, outspoken style. An entertainer by the name of Sophie Tucker, who worked in the early 1900s, paved the way for this kind of showmanship.

Born Sophie Abuza on January 13, 1884, while her mother was traveling from Russia to the United States, Abuza’s Jewish family was one of millions of Eastern European families who emigrated to the U.S. Abuza loved to sing and had a great sense of humor. She started performing at her father’s restaurant in Hartford, Connecticut, where she earned tips for her songs. After an unsuccessful marriage to a man named Louis Tuck, she decided to run away and try her luck in New York City.

Tucker soon became known for her outspoken comedy and her husky voice. When she first heard a recording of her own voice, she said, “I sound like a foghorn!” But people loved her, and in 1911 she recorded her theme song, “Some of These Days,” for the Edison Company. Her song would have been in the Catalog for Edison Cylinder Records, like the one in this photo.

By 1914, Sophie Tucker was a star, touring nonstop in the U.S. and Europe. She was also a generous woman both personally and professionally. During World War I she raised over $4 million for service members, and years later she donated all the proceeds from her autobiography, Some of These Days, to charity.

Sophie Tucker liked to call herself “The Last of the Red-Hot Mamas,” and she continued to perform in clubs, movies, and on radio, television, and stage until she was 78! How’s that for a red-hot career!