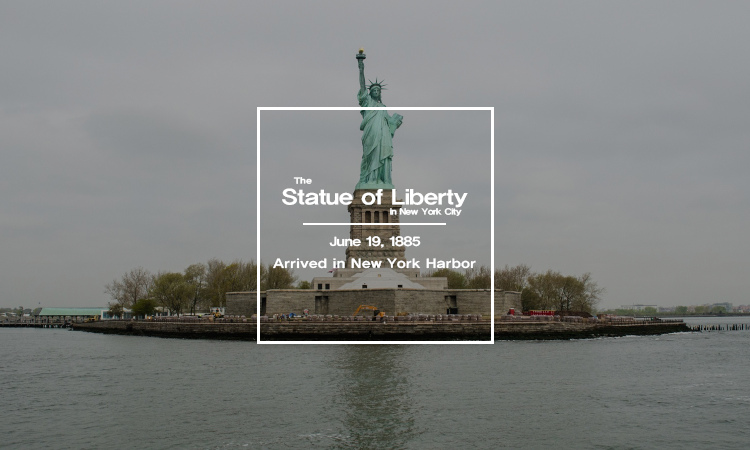 June 19, 1885
the Statue of Liberty Arrived in New York Harbor

These toes belong to a famous American lady, but she wasn’t born in America. The Statue of Liberty arrived in New York Harbor on June 19, 1885, as a gift of friendship from the people of France to the people of the United States. Sculptor Frederic-Auguste Bartholdi’s Liberty Enlightening the World stands 305 feet high and has come to symbolize freedom and democracy nationwide. Miss Liberty is made of copper sheets assembled on a framework of steel supports. How did the enormous statue emigrate to America?

In order to transport the statue to America, the figure was disassembled into 350 pieces and packed in 214 crates. Four months later, it was reassembled on Bedloe’s Island (renamed Liberty Island in 1956). On October 28, 1886, President Grover Cleveland dedicated the Statue of Liberty before thousands of spectators. But millions more would meet “Lady Liberty” in a different way.

The nearby Ellis Island Immigration Station, a major reception point for immigrants entering the United States, opened in 1892. Before the station closed in 1943, the Statue of Liberty welcomed more than 12 million immigrants to America. On its pedestal, words by poet Emma Lazarus reflect the hope for freedom and opportunity shared by the millions who see Miss Liberty after a long ocean journey:

Give me your tired, your poor,
Your huddled masses yearning to breathe free,
The wretched refuse of your teeming shore.
Send these, the homeless, tempest-tost to me.

What kinds of things do you think the Statue of Liberty inspired? How about music?