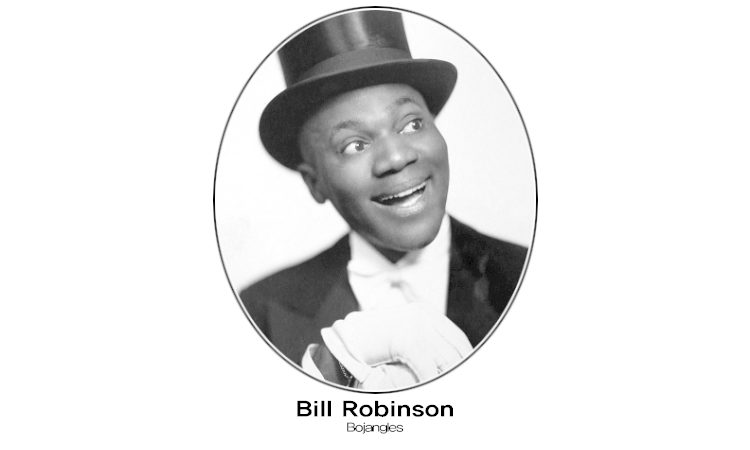 Tap, tap, shuffle, tap. Have you ever tap danced or watched others shuffle and tap? Some of those moves you’ve seen may have been created by legendary tap dancer Bill “Bojangles” Robinson. Born on May 25, 1878, in Richmond, Virginia, Robinson invented a new way to tap, transforming it from a flat-footed dance to a style that pushed the performer to his toes. Many of Robinson’s steps, including the famous “stair dance,” are commonly used today. Where did Mr. Bojangles get his feet moving?

Orphaned as a baby, Robinson began performing in local beer gardens at age six. Within two years, this young “hoofer,” or song-and-dance man, was entertaining audiences far from home. He performed on stage in “vaudeville,” shows featuring numbers by dancers, singers, comedians, and actors. By the time he was a young adult, he earned top dollar dancing on the vaudeville circuit and in nightclubs. You may have seen him in old movies, dancing alongside a little dimpled girl with golden curls. Can you guess who she was?

When motion pictures and radio took over vaudeville’s popularity in the 1930s, Robinson danced right into the scene. He appeared in 14 films, most frequently opposite Shirley Temple. He also appeared with Lena Horne in Stormy Weather (1943), an African American production, rare at the time.

Bill Robinson continued to wow audiences with his moves on stage and in film, even late into his life. On his 61st birthday, he danced down the street of Broadway in New York City. Performers and fans of dance still pay tribute to Bill “Bojangles” Robinson, a man of professional genius and personal generosity.