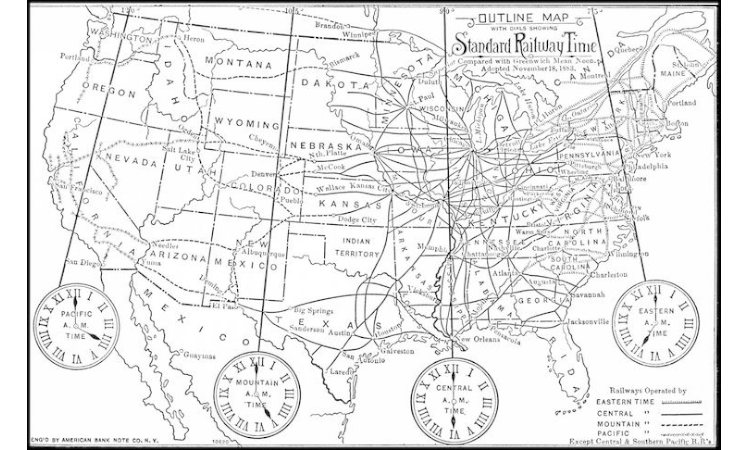 Before the U.S. had time zones, how did people traveling across the country know what time it was? Until the invention of the railway, it took such a long time to get from one place to another, that local “sun” time could be used. When traveling to the east or to the west, a person would have to change his or her watch by one minute every 12 miles in order to always have the correct time.

When people began traveling hundreds of miles in a day by train, calculating the time became a problem. Railroad lines needed to create schedules for departures and arrivals, but every city had a different time!

Finally, the railway managers agreed to use four time zones for the continental United States: Eastern, Central, Mountain, and Pacific. Local times would no longer be used by the railroads. The U.S. Naval Observatory, responsible for establishing the official time in the United States, agreed to make the change. At 12 noon on November 18, 1883, the U.S. Naval Observatory began signaling the change.

As Greenwich Mean Time (the official time used by the U. S. Naval Observatory) was transmitted by telegraph, authorities in major cities and managers of the railroads reset their clocks. All over the United States and Canada, people changed their clocks and watches to match the time for the zone they lived in. Quickly, the confusion caused by the many different standards of time was resolved.

What time zone do you live in?