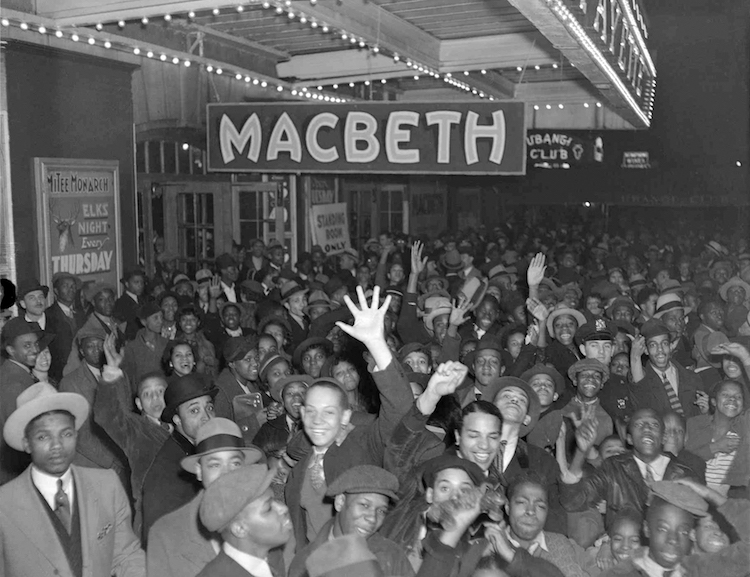 July 25, 1936
Closing Night of the WPA PErformance of Macbeth

Back during the Great Depression, when the stock market crashed and there was widespread unemployment, it was especially tough even for skilled performers to find work. So President Franklin D. Roosevelt established the Federal Theatre Project (FTP), as part of the Works Progress Administration (WPA), to help relieve the stress of unemployed writers, actors, and artists. The WPA was a national works program that helped people find jobs.

One of the most talked about shows was Shakespeare’s Macbeth, produced by John Houseman and directed by Orson Welles. July 25, 1936, was the closing night performance of Macbeth at the Park Theatre in Bridgeport, Connecticut. Critic Brooks Atkinson of The New York Times wrote of the production, “It overwhelms you with its fury and its phantom splendor.” Nowadays, Shakespeare’s plays are often set in different locations and time periods than those for which they were written, but it wasn’t always this way.

Orson Welles, just twenty-one at the time, created a brand new approach for this production. He cast African American actors in all the roles, moved the play’s setting from Scotland to the Caribbean, and changed the witches to Haitian witch doctors. Critics called the results “startling,” “splendid,” and “colorful.” Can you think of why Welles might have wanted to change the setting of the play? Do you think it made it the play more interesting or gave it a different meaning?