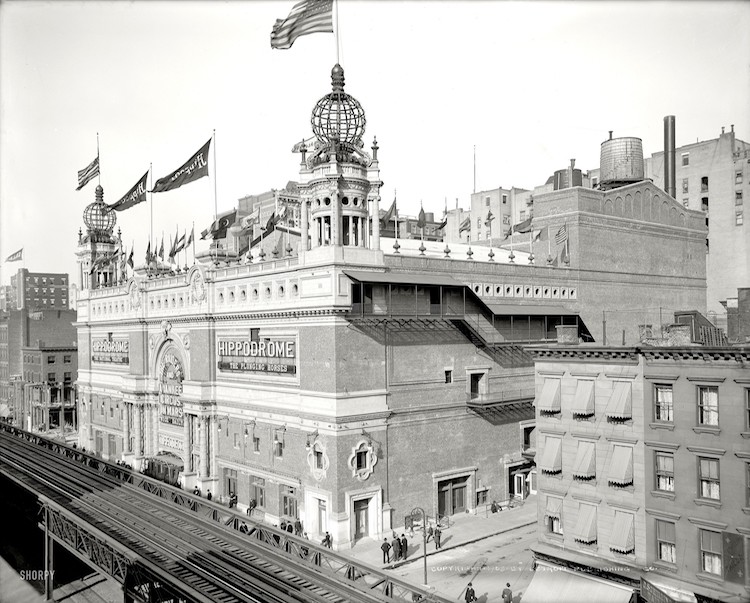 Would you like to watch Harry Houdini, legendary magician and escape artist, make an elephant disappear right in front of your eyes? Or watch diving horses while a 500-member chorus sings in triumph? Or see some of your favorite comedians and singers perform live on a huge sparkling stage? Back in the 1920s, you could have seen all this at New York City’s famous Hippodrome Theater. But on August 16, 1939, the Hippodrome closed its doors for the last time.

Built in 1905 with a seating capacity of 5,200 people, the Hippodrome was at one time the largest and most successful theater in New York. It featured lavish spectacles complete with circus animals, diving horses, opulent sets, and 500-member choruses. The most popular vaudeville (variety stage) artists of the day, including Harry Houdini, performed at the Hippodrome during its heyday. But by the late 1920s, the growing popularity of motion pictures replaced the vaudeville acts and circus spectacles presented at the Hippodrome.

In 1928, RKO, the motion picture company, purchased the theater. Movie screens took over the stages for audiences who were hungry for this new kind of entertainment. After it closed its doors in 1939, the Hippodrome Theater presented its final spectacle: the building’s demolition. The era that made the Hippodrome famous lives on in the American memory. Do you know the names of any other stars from that vaudeville era? Ask a grandparent!