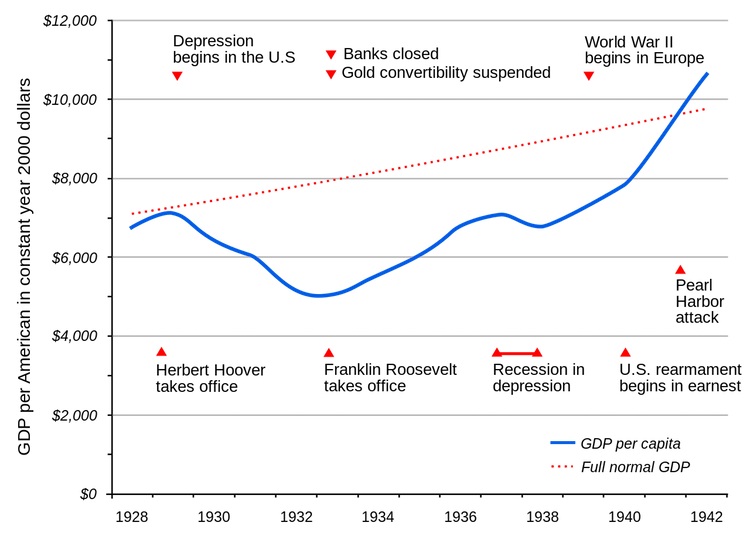 July 8, 1932
The Stock Market Fell to Its Lowest Point During the Depressic

George Mehales lost everything in the stock market crash of 1929, including his restaurant. “The first day of October in 1929 made me feel like I was rich . . . (then,) I was wiped out . . . I had nothing left.” Mehales, a Greek immigrant who lived in South Carolina, was just one of many inexperienced investors who hoped to get rich quick in the rapidly growing market of the 1920s. The stock market can be a good place to invest some of your money, but it is also risky, especially if you do not know much about stocks.

The Great Crash affected everyone, even those who had not bought stocks. People ran to their banks to get their savings, fearing the banks would run out of money.

Many banks had also invested in the stock market and lost money. W.W. Tarpley, a bank officer in Georgia, remembered the mob of people who came to his bank, fearful of losing everything, ” . . . people were losing their homes and some their savings of a lifetime. The saddest part of it was to see widows who probably had been left a little insurance and had put it all in the bank.”

The crash triggered the Great Depression. People all over the country not only lost their money, but also they lost their jobs. Businesses closed because they could not afford to pay their workers. Stock prices continued to fall, and on July 8, 1932, the market hit its lowest point during the Depression. Many lives were drastically changed, but only a few for the better.

Tarpley, the bank manager, was forced to sell his belongings and leave his hometown to look for work, but he was fortunate, as the Great Crash was only a minor setback for him. “Of course I felt like I was ruined at the time,” he told an interviewer in 1940, “but if the crash had not come, I might have still been down in that little South Georgia town working for a small salary.”

When Franklin Roosevelt was elected president at the end of 1932, he promised Americans a New Deal to bring economic relief. The government created many agencies to revive industry and agriculture and create jobs to help Americans get back on their feet. Important reforms to the banking and investment industry were made. The Federal Deposit Insurance Corporation (FDIC) was established to insure bank deposits, and the Securities and Exchange Commission (SEC) was formed to protect against stock market fraud. It took a long time though for the American economy to emerge from the Great Depression. The depression continued for 10 more years and didn’t end until the military buildup of the early 1940s, as the United States geared up to enter World War ll.