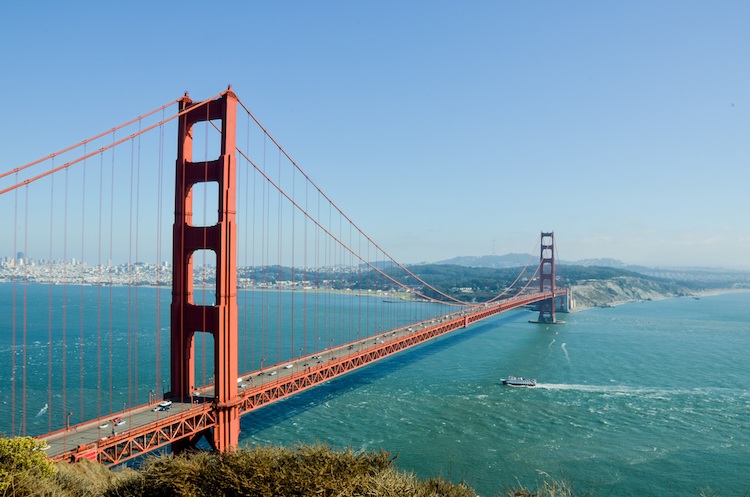 May 27, 1937
San Francisco’s Golden Gate Bridge was Completed and Opened

What sights do you think of when you picture the city of San Francisco? How about the massive and lovely 4,200-foot orange-painted steel suspension bridge known as the Golden Gate Bridge? The famous bridge was completed and opened to pedestrian traffic on May 27, 1937. The next day, with a push of a telegraph button in the White House, President Franklin Roosevelt opened the bridge to cars, too. The Golden Gate is special for a number of reasons. Until 1964, it was the longest suspension bridge in the world. (Today, the Akashi-Kaikyo Bridge in Japan boasts the longest span at over 6,500 feet.) Do you know how it got its name?

The area known as the Golden Gate is the channel formed where the mouth of the San Francisco Bay meets the Pacific Ocean. People used the name Golden Gate as early as 1846, even before the gold rush and long before the bridge. Explorer John C. Fremont was possibly the first to call the rocky straits the “Golden Gate.”

Construction of the bridge began in 1932, during the Great Depression, when jobs were scarce. The men working on the Golden Gate Bridge (a four-and-a-half-year project) were greatly envied, even though they worked in very dangerous conditions, balancing high above the freezing ocean waters.

To combat the dangerous working conditions, bridge designer Joseph Strauss introduced the hard hat and a safety net that stretched end to end under the bridge. Nineteen workers fell. Saved by that net, they called themselves the Half-Way-to-Hell Club.

In May 1987, to celebrate the bridge’s 50th anniversary, some 300,000 people reenacted “Pedestrian Day ’37” with an event dubbed “Bridgewalk ’87.” Two years later, the gracefully suspended bridge withstood a 7.1 magnitude earthquake without incident. The Golden Gate is a wonder to see in person. Have you ever walked the bridge? Ask relatives and friends if they have.