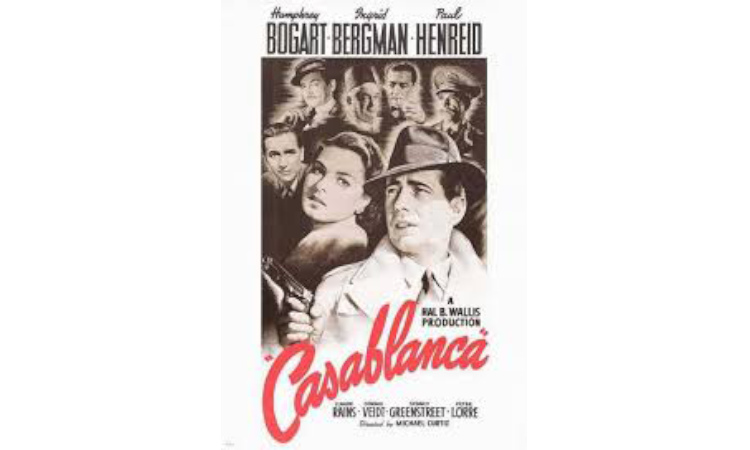 “This looks like the beginning of a beautiful friendship,” says hero Rick Blaine at the end of the movie classic “Casablanca.” Do you know any other lines from this famous film? New Yorkers watched the motion picture for the first time on November 26, 1942. At the same time, the Allied Expeditionary Forces (AEF) of World War II landed in North Africa, the real Casablanca’s locale, to take over the area that had been occupied by the Germans. Casablanca, Morocco’s chief port city, was the setting of both the film and, later, of a major conference of the Allied leadership. Consequently, “Casablanca” the movie ended up playing a much more meaningful role than just being a hit at the box office.

In the film, hero Rick Blaine settles in Casablanca after fighting fascism (a dictatorship) in Spain. He opens up a nightclub called “Rick’s Cafe American.” (“Rick’s Place” became World War II military code for the city of Casablanca.) When Rick’s former lover, Ilsa, arrives at his cafe with her French Resistance leader husband, the club owner helps them escape. By film’s end, Rick and Ilsa have given up each other to serve a greater good–freedom from fascism. Just as the Allied invasion of Casablanca advanced box office sales, so the film “Casablanca” reinforced the war effort by underscoring the value of freedom and the importance of personal sacrifice. As Rick says to Ilsa in the famous farewell scene, “I’m not good at being noble, but it doesn’t take much to see that the problems of three little people don’t amount to a hill of beans in this crazy world. Someday you’ll understand that. Here’s looking at you, kid.”

The city of Casablanca suffered severe bombardment during General Dwight Eisenhower’s “Operation Torch.” Six weeks later, in January 1943, however, President Franklin D. Roosevelt and British leader Winston Churchill met there for the Casablanca Conference. There they developed a single military strategy and decided Germany, Italy, and Japan must surrender unconditionally. At the time, the movie “Casablanca” was a compelling anti-Nazi film, starring Humphrey Bogart and Ingrid Bergman. It won Oscars for Best Picture, Best Direction and Best Screenplay of 1943. It also featured the beloved song “As Time Goes By,” which begins, “You must remember this,” as performed by the cafe’s pianist, Sam. If you haven’t seen it, rent it. If you have, you might want to “Play it, Sam.”