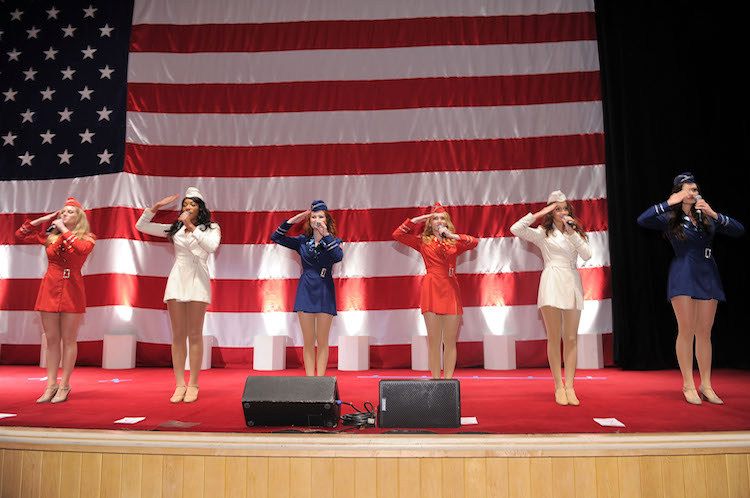 attends the USO 45th Annual Woman Of The Year Luncheon honoring Military Women and Women Business Leaders at the Grand Ballroom at The Waldorf=Astoria on April 26, 2011 in New York City.

When a World War II soldier received a needed break from fighting, where could he go and what could he do? A solution to this problem came with the formation of the United Service Organizations, popularly known as the USO, on February 4, 1941. Its mission was to provide recreation for on-leave members of the U.S. armed forces and their families. USO recreational clubs supplied a place for everything from dancing, movies, and live entertainment to a quiet place to talk, write letters, or find religious counsel.

At the suggestion of General George C. Marshall in 1940, and with the approval of President Franklin Roosevelt, representatives from existing public service organizations came together to form the USO Inc. Creating the USO were the Salvation Army, the YMCA, the National Board of the YWCA, the National Jewish Welfare Board, and the National Catholic Community Service. During World War II, 739,000 volunteers operated more than 3,000 recreational clubs, which were established wherever they could find room. Clubs were housed in churches, museums, barns, railroad cars, storefronts, and other unlikely locales.

During World War II, the best-known USO center in the U.S. was New York’s Stage Door Canteen, celebrated in song and in the film “Stage Door Canteen” starring Katharine Hepburn and Groucho Marx. A message on the door read, “All American place for the all American boy.” The Hollywood Canteen was one of the largest USOs, with capacity for 10,000 and featuring entertainment by famous movie stars like Bette Davis, Marlene Dietrich, and the USO champion, Bob Hope.

Comedian Bob Hope is famous for taking his USO shows on the road and performing at bases and hospitals, wherever U.S. servicemen were stationed in World War II and beyond. Disbanded in 1948, the USO reorganized during the Korean War, expanded considerably during the Vietnam War, and is still in existence today.
Bob Hope traveled to the troops in the Korean War, the Vietnam War, and the Persian Gulf War. His “cowardly wise-guy humor” has brought laughter to millions of GIs. If you know anyone in the armed forces, ask if they have ever experienced a USO-sponsored club or event. Maybe they even saw Bob Hope live.