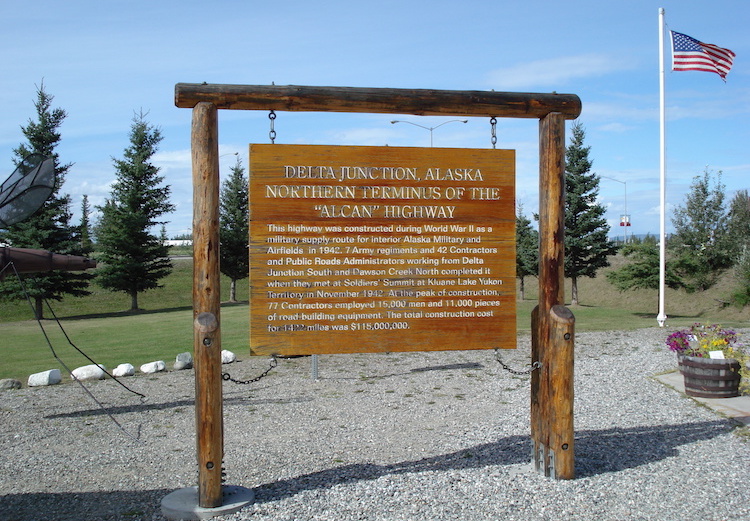 Have you traveled on any memorable highways in the U.S.? You would surely remember the Alcan Highway. Following chilly festivities held the day before with a temperature of 35 degrees below zero, the Alaska-Canadian (Alcan) Highway opened for its first full day of traffic on November 21, 1942. This important overland military supply route, a 1,522-mile roadway through the wilderness, connected Dawson Creek, British Columbia, with Fairbanks, Alaska. The threat of Japanese invasion through Alaska made the road a World War II priority. Over the Alcan Highway, the military could transport troops, food, and supplies to strategic points in Alaska. How long do you think it took to construct?

When the Japanese invaded the nearby Aleutian Islands, completing the highway became even more urgent. More than 10,000 U.S. troops worked in cooperation with Canadian troops and independent contractors to accomplish this remarkable engineering feat in just over eight months! Among those soldiers building the Alcan Highway were four units of the Army’s Black Corps of Engineers. All troops worked under extreme conditions. Mosquitoes and flies swarmed them in the summer heat, and temperatures near 40 degrees below zero chilled them to the bone in winter for weeks on end. To build the Sikanni Chief River Bridge, men waded chest deep into freezing waters to place the trestles. To keep themselves going, some of the men sang. Some African American soldiers, mainly from the South, sang old work chants like this “Steel-Driving Song.”

In addition to military personnel, about 2,000 civilians worked to construct the Alcan Highway. One advertisement stated, “THIS IS NO PICNIC! Working and living conditions on this job are as difficult as those encountered on any construction job ever done in the United States or foreign territory. . . .” But workers signed on anyway. Known by the men who built it as “The Road,” the Alcan Highway is still Alaska’s main link to the “lower 48” states. It is considered quite a challenge to drive, but a magnificent journey. If you traveled it, you might agree with an 1888 travel guide to Alaska, which stated, “Our trip to Wonderland will remain to the end of our lives a bright chapter in our experience.”