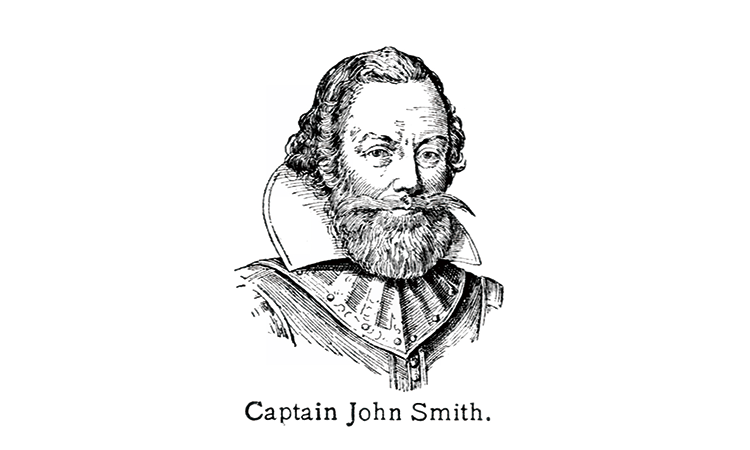 Did the Indian princess Pocahontas really save his life? Was he really captured and sold into slavery in Turkey, escaping with the love of a Turkish woman? John Smith may have been the first romantic of America; he certainly became an appreciated leader. Explorer, adventurer, writer, and cartographer, Smith assumed a leadership role at the Jamestown settlement on September 10, 1608. On the Atlantic coast of present-day Virginia, Jamestown was the first British settlement in North America, founded in 1607. At first, Smith wasn’t even considered for the government.

The charismatic and controversial Smith was originally excluded from the government of the settlement on the grounds that he had conspired to mutiny during the voyage to Virginia. But because of his strength and ingenuity, the people of Jamestown needed him. He began to run things long before he officially received his post, leading the settlers through struggles against disease, starvation, and frequent raids upon the settlement by the Native American tribes. A brash figure with a bold self-confidence, Smith brought his soldiering experience to Virginia.

Smith claimed that, while fighting in Transylvania, Hungary, against the Turks in 1600, he had been wounded, captured, and sold into slavery in Turkey. Smith said that a Turkish woman had fallen in love with him and helped him escape. Whether that is a “tall tale” or not, his most famous Jamestown experience, equally as romantic and daring, has become a legendary story in American history. Captured and brought before Algonquin Chief Powhatan in December 1607, Pocahontas, the chief’s young daughter, supposedly saved Smith’s life by throwing herself between him and his would-be executioners.

In the summer of 1608, Jamestown prospered. Smith was injured in a gunpowder accident in 1609 and was forced to return to England. Returning in 1614, he dubbed the region to the north of Virginia, New England. Do you think Smith’s stories are true? You might want to read more of Captain Smith’s adventures in his book, Historie of Virginia, New-England, and the Summer Isles, published in 1624.