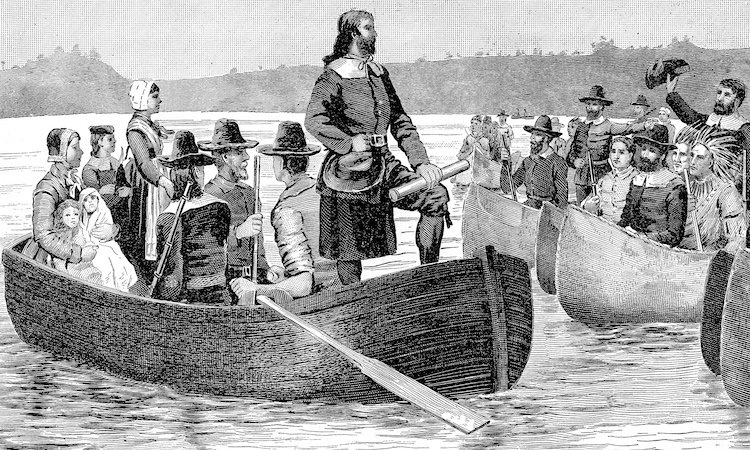 Return of Roger Williams from England with the First Charter, 1644. From a painting by C.R. Grant. Engraving from The Providence Plantations for 250 Years, Welcome Arnold Greene, 1886.

What is your religion or spiritual belief? In the U.S., we can take it for granted that people are free to follow any belief they wish. Elsewhere, this often isn’t the case.

During the 17th century, people left England to escape religious persecution. Many colonists came to America to be able to freely practice their religions. Roger Williams was a defender of religious liberty who arrived in Boston on February 5, 1631.

Ordained to the ministry in the Church of England, Williams discovered Puritanism, a reform movement that developed within the Church of England, during his first parish duty. He converted. Soon after, he was asked to be minister in the Massachusetts Bay Colony. Leaving behind the religious intolerance under England’s King Charles I, he and his wife journeyed across the ocean to join the “American Experiment” in Boston in 1631. At first, Williams just wanted to reform the Church of England; soon, he sought separation completely.

Many of Williams’s parishioners did not agree with his idea to separate from the Church of England. He then became minister in Salem. There, his ideas also proved too radical. He went to Plymouth but again fell into disfavor. Williams insisted that land must be purchased from the Indians, rather than taken from them forcefully, in order to claim title to it. He again went to Salem and was eventually put on trial in 1635 for his views. His sentence was banishment. Williams then purchased land from the Narragansett Indians and established the settlement of Providence, Rhode Island.

Williams founded the colony of Rhode Island based upon principles of complete religious toleration, separation of church and state, and political democracy (values that the U.S. would later be founded upon). It became a refuge for people persecuted for their religious beliefs. Anabaptists, Quakers, and Jews settled in Rhode Island. After forming the first Baptist church in America, Williams left it to seek spirituality in different ways. He stopped preaching to his friends, the Indians, when he realized that their form of worship also fell under his principle of religious freedom. He declared, “forced worship stinks in God’s nostrils.” Williams’s ideas were radical at the time, but can you imagine living in a place without religious freedom now?