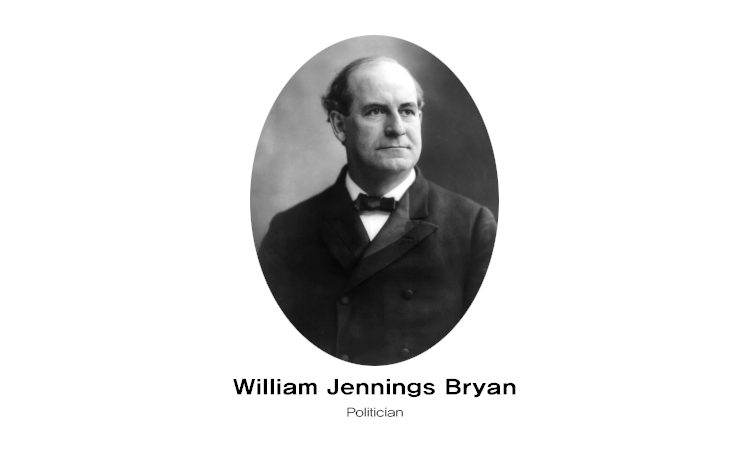 A great speaker and three-time presidential candidate, William Jennings Bryan was born on March 19, 1860, in Salem, Illinois. Because he felt deeply about his religion and consistently defended the ordinary American, people called him “the Great Commoner.” He had an active political career during his entire life, from a young lawyer entering the House of Representatives to the seasoned prosecuting attorney at the Scopes Trial, where the issue of whether evolution should be taught in school was argued in 1925. His controversial views gained him many supporters and critics. Can you think of people today who raise such controversy?

At 36, Bryan ran for president. He delivered a speech accusing the wealthy of supporting the gold standard (the worth of paper money determined by the value of gold) at the expense of the average worker. “You shall not press down upon the brow of labor this crown of thorns, you shall not crucify mankind upon a cross of gold,” he said. This moving speech gained him support, but not enough to win the presidency. After three unsuccessful presidential races, Bryan served as secretary of state under Woodrow Wilson. However, he resigned in 1915 as World War I approached because he opposed Wilson’s foreign policies, which he believed would draw America into a war against Germany.

Bryan brought many of his religious beliefs to the Senate. He supported Prohibition, which made the buying and selling of alcohol illegal in the U.S., and an amendment to the Constitution preventing schools from teaching evolution (the theory that man developed, over millions of years, from apes). In 1925, Bryan was involved in a trial against a teacher, John T. Scopes, who broke the law by teaching the theory of evolution in a high school biology class.

The drama of the courtroom argument between Bryan and Clarence Darrow, who represented Scopes, was captured in a famous play, Inherit the Wind (1955) and movie (1960). Clarence Darrow argued against Bryan and said, “Civilization is on trial.” Scopes was convicted and fined $100.