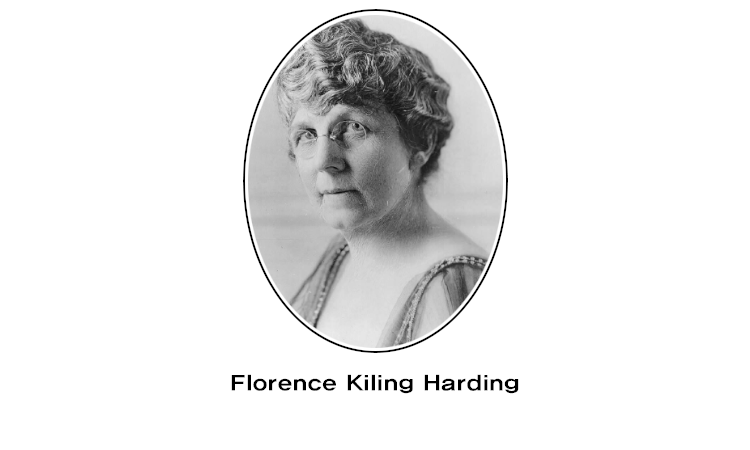 Do you know who was the first American woman allowed to vote for her husband for president? It was none other than Florence Kling Harding, wife of Warren G. Harding, born on August 15, 1860, in Marion, Ohio. She was a strong supporter of women’s suffrage (the right to vote) and was able to cast her ballot for her husband in the presidential campaign of 1920 because the 19th amendment had been ratified that summer.

Florence Kling Harding was a wife, mother, and business manager and was one of the first women to bring a professional identity to the role of first lady.

Florence Harding had an important role in her husband’s career, which he readily acknowledged. “I owe allegiance to only one boss–and she sits right over there in that box. She’s a mighty good one too,” said Warren Harding in a campaign speech in 1910. Mrs. Harding, who was called “the Duchess” by her husband, worked tirelessly for his campaign for president.

When Mrs. Harding moved into the White House, she reopened the mansion and grounds to the public, as they had been closed during Woodrow Wilson’s illness while he was president. Mrs. Harding presided over a crowded social calendar in the White House. She had many ceremonial duties, such as the one in this photo, where she is greeting the wives of the Philippine delegation who were seeking the recognition of complete independence of the islands. Mrs. Harding is in the center of the group along with Mme. Jaime C. De Veyra, who presented the Philippine women.