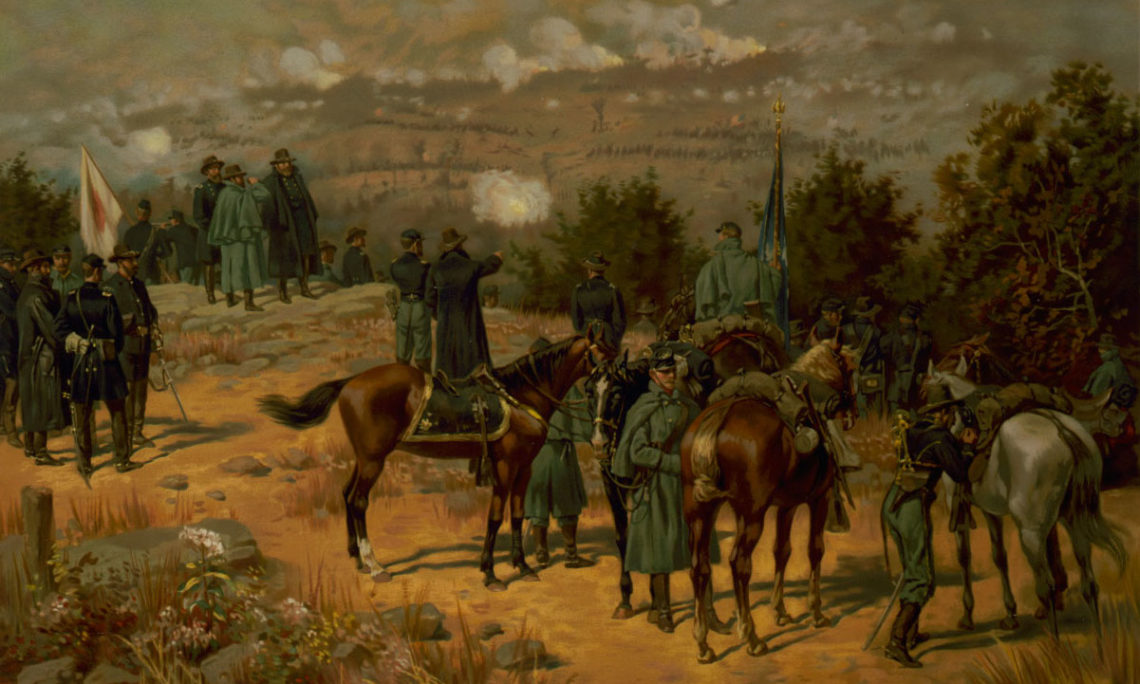 November 23, 1863
Fighting Commenced in the Battle of Chattanooga

The three-day Battle of Chattanooga is one of the most dramatic turnabouts in American military history. It began on November 23, 1863, and when the fighting stopped, Union forces had driven Confederate troops away from Chattanooga, Tennessee, into Georgia, setting the stage for Union General William T. Sherman’s triumphant “March to the Sea” a year later. Sherman wreaked havoc on Southern towns and freed slaves as his troops blazed a path of destruction, burning towns between Atlanta and Savannah, Georgia.

It was a strategic victory because of the town’s steamboat port and railway station. But in the early fall of 1863, rebel forces moved into the mountains and bluffs overlooking Chattanooga, trapping the Union Army.

Commanding posts at Lookout Mountain, almost 2,000 feet above the Tennessee River Valley, Confederates fired cannonballs down upon the Union troops at Chattanooga. They aimed for river and rail traffic that entered the village with supplies from Union-controlled western Tennessee. Surrounded, with no supply lines, the Union troops seemed destined to fall.

Their fate changed in mid-October with the fresh leadership of Major General George Thomas. Shortly thereafter, Major General Joseph Hooker moved into the area with 20,000 Union soldiers. Union General Ulysses S. Grant followed. He ordered Union engineers to construct a pontoon bridge west of town, giving the army access to shipments of food and ammunitions once again. When General Sherman arrived with 16,000 more men in mid-November, the Union Army was ready to fight.

On November 23, Thomas’s troops overtook Confederates occupying Orchard Knob, between Chattanooga and the mountains. The next day, in what is known as the “Battle Above the Clouds,” Hooker drove his men on to victory at Lookout Mountain. Some of the bloodiest fighting took place there at Cravens House. On November 25, the last day of the battle, the Union Army crushed the Rebel line, forcing the Rebels to retreat further south into Georgia and, ultimately, to their final defeat in the Civil War.