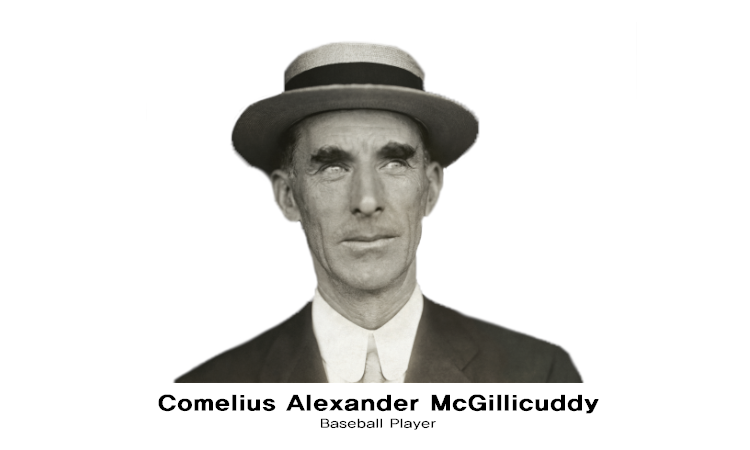 Connie Mack was a professional baseball catcher in the 1880s, when protective equipment was nearly nonexistent. His shins were exposed and his mitt, mask, and chest protector provided little cover. At 6 feet 1 inch and 150 pounds, Mack was string-bean thin and could use all the protective gear baseball had to offer.

Connie Mack, the “Tall Tactician” of major league baseball, was born on December 22, 1862, in East Brookfield, Massachusetts. His full name was Cornelius Alexander McGillicuddy. In 1901 Mack became manager and owner of 25 percent of the baseball team called the Philadelphia Club. Do you know what new name he gave the team?

Mack renamed his team the Athletics and remained the manager and owner for 50 years. Mr. Mack, as he was respectfully referred to, was easy to spot on the bench (and in this photograph). He was the man in the business suit. He never wore a uniform and rarely went into the clubhouse, except for a pre-game meeting, a practice he began in the major leagues. His habit of directing his players on the field by waving his scorecard earned him the title “10th Man on the Field.” Whatever his particular style, Connie Mack had a knack for creating a winning team.

Mack led the A’s to their first pennant in 1902. He often said that pitching was 75 percent of baseball, and strong pitching was the hallmark of his winning teams. He had a reputation for turning young pitchers into stars. Between 1910 and 1914, his club won four American League pennants and three World Series.