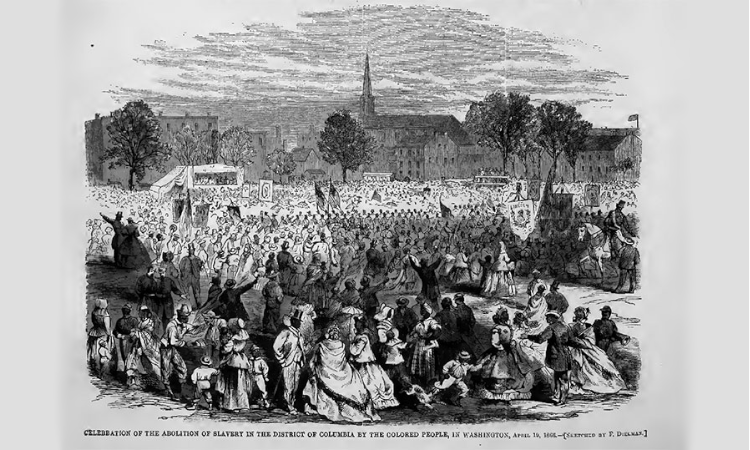 Abolition in the District of Columbia

April 16, 1862
Abolition in the District of Columbia

Looking at the U.S. now, it’s shocking to imagine slavery existing throughout the country, or in the District of Columbia, the nation’s capital. President Abraham Lincoln felt this all his life. On April 16, 1862, he signed an act abolishing slavery in the District of Columbia, an important step in the long march toward freedom, citizenry, and equal rights for African Americans. How big was the slave trade in D.C.?

Before 1850, slave pens, slave jails, and auction blocks were a common sight in the District of Columbia. Though leaders like John Quincy Adams asked Congress to end slavery back in 1828, Congress did not act for nearly 20 years. In 1849, Lincoln, then a young Illinois congressman, first attempted to end the slave trade in the District of Columbia. But it wasn’t until he became president that Lincoln could finally make it happen.

Lincoln saw slavery as morally wrong. He abolished slavery in the capital, and five months later went on to issue his preliminary Emancipation Proclamation, which threatened to free all slaves in states in rebellion if those states did not return to the Union by January 1, 1863. In 1866, on the fourth anniversary of the District’s Proclamation of Freedom, African American citizens of Washington, D.C., staged a huge celebration. Some 5,000 people marched up Pennsylvania Avenue past 10,000 cheering spectators, rejoicing over that first step to freedom.