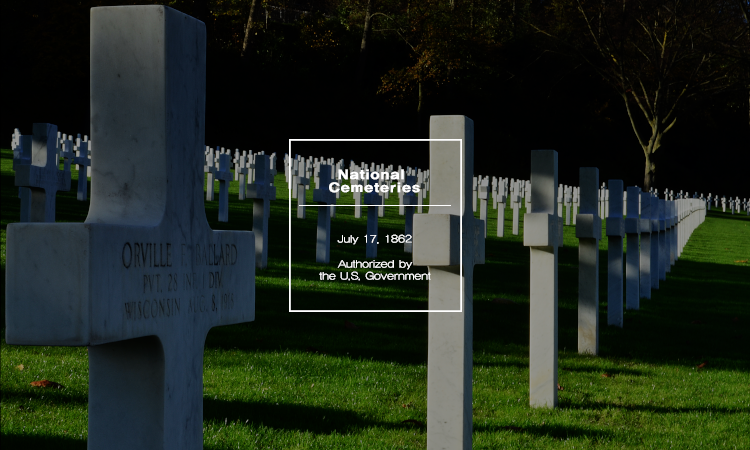 July 17, 1862
National Cemeteries were Authorized by the U.S. Government

What happens to soldiers when they die during a battle? During the Civil War, soldiers who died on the battlefields, in field hospitals, or in prison camps were buried where they fell. At the end of the war, search and recovery teams visited all the places where soldiers might have been hastily buried and dug up the remains to bring them home. It took five years to complete this process, and more than 250,000 sets of remains were recovered.

On July 17, 1862, President Lincoln signed legislation authorizing the creation of national cemeteries by the U.S. government. By 1870, 73 national cemeteries had been established, many in the southeastern United States, the site of many battles and field hospitals during the war.

“We here highly resolved that these dead shall not have died in vain–that this nation, under God, shall have a new birth of freedom–and that government of the people, by the people, for the people, shall not perish from the earth.”

President Lincoln spoke these words on November 19, 1863, as he dedicated the national battlefield cemetery at Gettysburg, Pennsylvania. His short speech became known as the Gettysburg Address and is one of the most often-quoted addresses in American history.

Of all the national cemeteries in the U.S., Arlington National Cemetery in Arlington, Virginia, is the best known. Soldiers who died in battle, other war veterans, U.S. presidents, and government leaders are all buried there. Arlington National Cemetery also includes the Tomb of the Unknowns, a tomb in honor of the people who lay unidentified on battlefields from wars fought for freedom and independence.