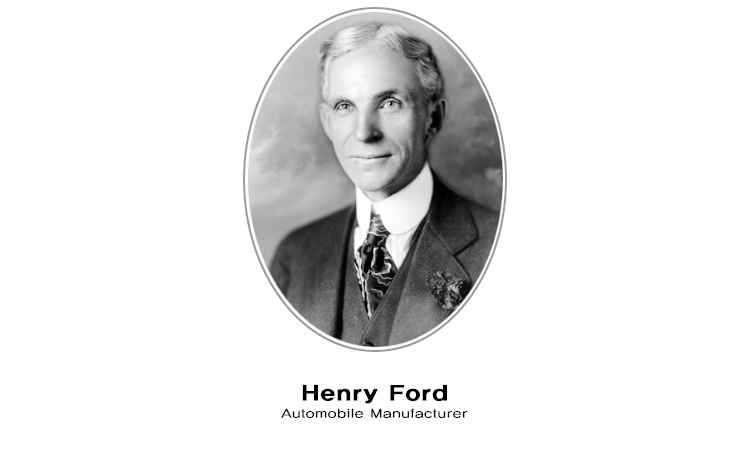 Born on July 30, 1863, on his family’s farm in Dearborn, Michigan, Henry Ford enjoyed tinkering with machines from the time he was a young boy. His work on the farm and a job in a Detroit machine shop allowed him many opportunities to tinker and experiment. By 1896, Ford had constructed his first horseless carriage, but he wanted to do even more!

“I will build a car for the great multitude,” Ford proclaimed. At first the automobile had been a luxury item only for the wealthy. Henry Ford wanted to create a car that ordinary people could afford, and in October 1908, he did it. The Model T sold for $950. In nineteen years of manufacture, Ford lowered the price to $280 and sold 15,500,000 in the U.S. alone.

How did he make the Model T so inexpensive?

Ford invented the modern assembly line. He doubled his workers’ wages and cut the workday from nine to eight hours. Ford did this to ensure quality work and allow a three-shift workday. As a result, the company was able to make Model T’s twenty-four hours a day!

The automobile altered American society forever, changing where and how we lived. As more Americans owned cars, the organization of cities changed. The United States saw the growth of the suburbs and the creation of a national highway system. Americans were thrilled with the possibility of going anywhere, anytime. Ford witnessed many of these changes during his lifetime. In his later years, he spent most of his time working on Greenfield Village, a restored rural town modeled after his memories of Dearborn during his youth. Next time you are out on the road, try to imagine life without cars. Ask your family and friends how different they think the world would be.