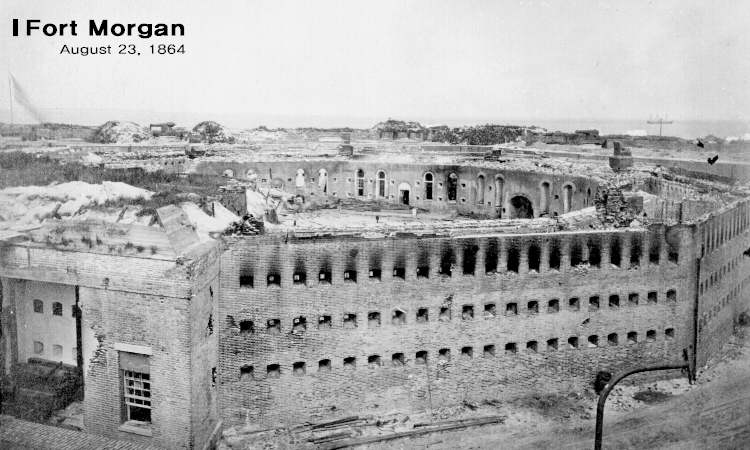 “Damn the Torpedoes! Go Ahead!” Union Admiral David Farragut shouted this famous line in a brave moment of the Civil War on his way to Fort Morgan, Alabama. On August 23, 1864, the Union navy captured the fort, breaking the Confederate dominance of the ports of the Gulf of Mexico. The Union fleet of 18 ships sailed into the channel on August 5. Boom! One of the ships hit a mine, at the time known as a “torpedo.” “Torpedoes ahead!” came the warning. Did the Admiral listen?

In reply to the warning, “Torpedoes ahead!” given by the ships ahead, Farragut called out, “Damn the torpedoes!” and taking the lead with his flagship the Hartford, sailed over the double row of mines and into Mobile Bay in Alabama. The bottom of the ship even scraped the mines. But none exploded. The rest of the fleet followed Farragut’s flagship into the bay, and to victory against the Confederate fleet.

During the next weeks, the Union navy strengthened its hold on Mobile Bay by destroying or capturing the Southern ships and tightening the blockade (the ships surrounded the bay to prevent passage of other ships). The surrender of Fort Morgan was an important victory for the North. The South had used the fort to ship and receive supplies. A great deal of Confederate income came from shipping cotton and produce to Europe. Ammunition and basic supplies that the South needed were shipped there. Without the Fort in Mobile Bay, those supply routes were cut off. With his brave and stubborn cry Admiral Farragut and his fleet secured that naval victory for the Union.