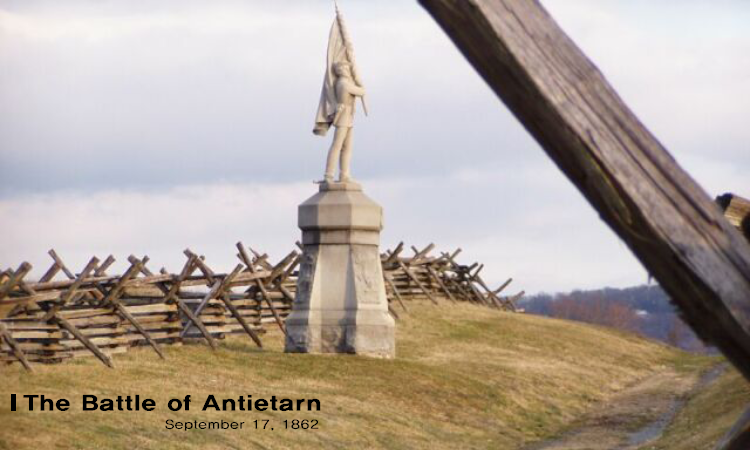 At dawn, the hills of Sharpsburg, Maryland, thundered with artillery and musket fire as the Northern and Southern armies struggled for possession of the Miller farm cornfield during the Civil War. For three hours, the battle lines swept back and forth across the land. More lives would be lost on September 17, 1862, than on any other day in the nation’s history.

By mid-morning, General Robert E. Lee’s Confederate troops were crouched behind the high banks of a country lane. They fired upon advancing Union troops, but the Union General, George B. McClellan, held a strategic advantage–a scout had discovered a copy of the Confederate army’s battle plan.

An overwhelming number of Northerners broke through the Confederates’ line. Union bullets rained down the lane onto Confederate soldiers, and the former Sunken Road came to be known as Bloody Lane because of the tragic death toll suffered there.

By nightfall, the Confederates occupied the town of Sharpsburg, but the battle was a Union victory. More than 23,000 men were killed, wounded, or missing in action. The next day, Lee began his retreat across the Potomac River. Lee’s plan to find new recruits and supplies in Maryland, a slave-holding state that remained in the Union, had failed. The next year he would launch another assault into Union territory, which came to a head at the 1863 Battle of Gettysburg in Pennsylvania.