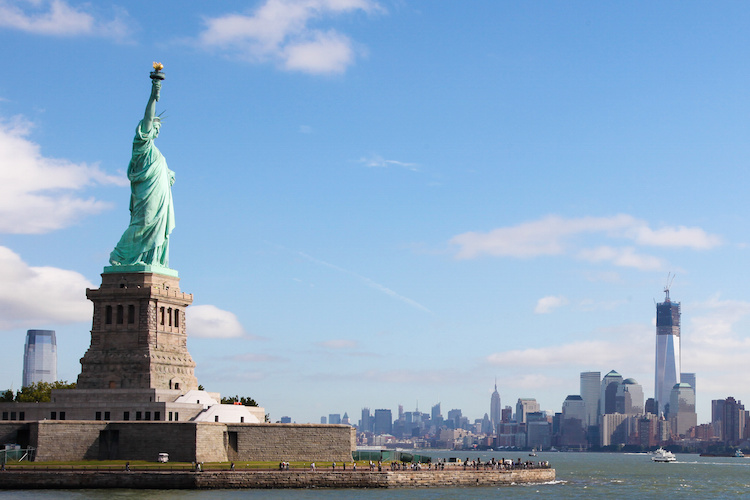 Panoramic skyline of Manhattan with the Statue of Liberty in New York City, US

The Liberty Bell is a well-known symbol of freedom in the United States.

The bell was first made in 1752 for the Pennsylvania State House, now known as Independence Hall. The bell was cast in London, England, and shipped to Pennsylvania. Soon after it arrived, the bell cracked. In 1753, a new bell was cast from the same metal by John Pass and John Stow. Their names and the year in Roman numerals, MDCCLIII, are marked on the bell. It also has a Bible verse written on it: “Proclaim LIBERTY throughout all the Land unto all the inhabitants thereof” (Leviticus 25:10).

In the early 1800s, people who wanted to outlaw slavery called it the “Liberty Bell” and used it as a symbol for their cause. In 1846, another crack began to develop in the bell and it was repaired. It rang for George Washington’s birthday in that same year, but then it cracked again and has not been rung since. The bell traveled around the country after the Civil War (1861-1865), and since 1915 it has stayed in Philadelphia. The Liberty Bell is now on display in a visitor center next to Independence Hall, where many people come to see it each year.

Independence Hall is a public building in Philadelphia, PA. It was in this building that some of the most important events of our Nation’s history took place.

Our Founding Fathers and colonial leaders met to plan the future of the new Nation. The Declaration of Independence (1776) and the United States Constitution (1787) were debated and ratified here. It is a U.S. National Historic Landmark. Independence Hall was also the home of the Liberty Bell for over 200 years.

The United States flag is a symbol of our Nation. It has 13 horizontal stripes that stand for the 13 original colonies; seven are red, and six are white. In the upper left corner there are 50 white stars on a blue background; these stand for the 50 states in our United States.

The first U.S. flag was designed in 1777, but the flag has been changed many times since then. New stars were added each time new states joined the Union. The 50-star flag we use today dates from July 4, 1960, after Hawaii became the 50th state.

The Founding Fathers chose the bald eagle to be the national bird of the United States in 1782. It is one of the best known symbols of our Government. The eagle can be seen on the Great Seal of the United States, on the Presidential Seal, in the logos of Federal agencies, on coins and paper money, and on postage stamps.

Bald eagles have a white head and tail, dark brown body and wings, and yellow beak, feet, and eyes. The feathers are all brown for the first several years of their life until they are full grown. The name “bald eagle” does not mean that this bird has no feathers. It comes from the word piebald, which refers to the eagle’s light and dark colored feathers. This large, majestic bird can only be found in North America.

The White House is the name given to the official home and workplace of the President of the United States. It is located at 1600 Pennsylvania Avenue in Washington, D.C. Every President except George Washington has lived there. It was built between 1792 and 1800; in 1814, it was burned by the British army when they invaded the city during the War of 1812.

After the war ended, the White House was rebuilt in the 1820’s and has been expanded over the years. It has been redecorated on the inside and today is open for public tours. The President’s family also lives in the White House.

The President’s office is called the Oval Office because the room is shaped like an oval. In the Oval Office, the President signs bills, meets with staff, and hosts guests and visitors. The furniture in the room may change over the years, but one of the most famous pieces is the Resolute desk, which was a gift from the British Queen Victoria to President Hayes in 1880. It was made from the wood of a British ship.

The “Star-Spangled Banner” is the national anthem, or national song, of the United States.
The words are from a poem that was written by Francis Scott Key in 1814.
He watched a night-time battle between Great Britain and America that took place in Baltimore at Fort McHenry during the War of 1812.

He was very excited when the American flag was still flying in the morning and wrote a poem that began with these words:

O say can you see, by the dawn’s early light, 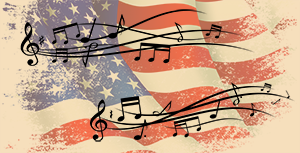 What so proudly we hail’d at the twilight’s last gleaming,

Whose broad stripes and bright stars through the perilous fight

O’er the ramparts we watch’d were so gallantly streaming?

And the rocket’s red glare, the bombs bursting in air,

Gave proof through the night that our flag was still there,

O say does that star-spangled banner yet wave

O’er the land of the free and the home of the brave?

The flag that flew over Fort McHenry in 1814 and inspired Francis Scott Key to write the poem is also called the “Star Spangled Banner.” The flag is old and fragile, but is now being cared for at the American Museum of Natural History in Washington, D.C.

The Statue of Liberty is a symbol of freedom and is located in New York on Liberty Island. It is a very tall statue of a woman holding a torch in her right hand and a tablet with the date July 4, 1776, in Roman numerals in her left hand.

Her crown has seven points that represent rays of light; the name for the statue is “Liberty Enlightening the World.” There are broken chains around her feet that also symbolize her freedom.

The Pledge of Allegiance is a promise of loyalty to the United States. The first version of the Pledge of Allegiance was written by Francis Bellamy in 1892 to mark the 400th anniversary of the arrival of the explorer, Christopher Columbus, in the Americas. Over the years, more words were added, and the pledge that we recite now was written in 1954:

“I pledge allegiance to the Flag of the United States of America, and to the Republic for which it stands, one Nation under God, indivisible, with liberty and justice for all.”

The Pledge of Allegiance is recited at the beginning of classes in school, and most everyone can say it from memory. It should be recited standing up, facing the flag, and with the right hand over the heart. In the United States Congress, the sessions of the House of Representatives and the Senate begin their daily business with the Pledge of Allegiance.