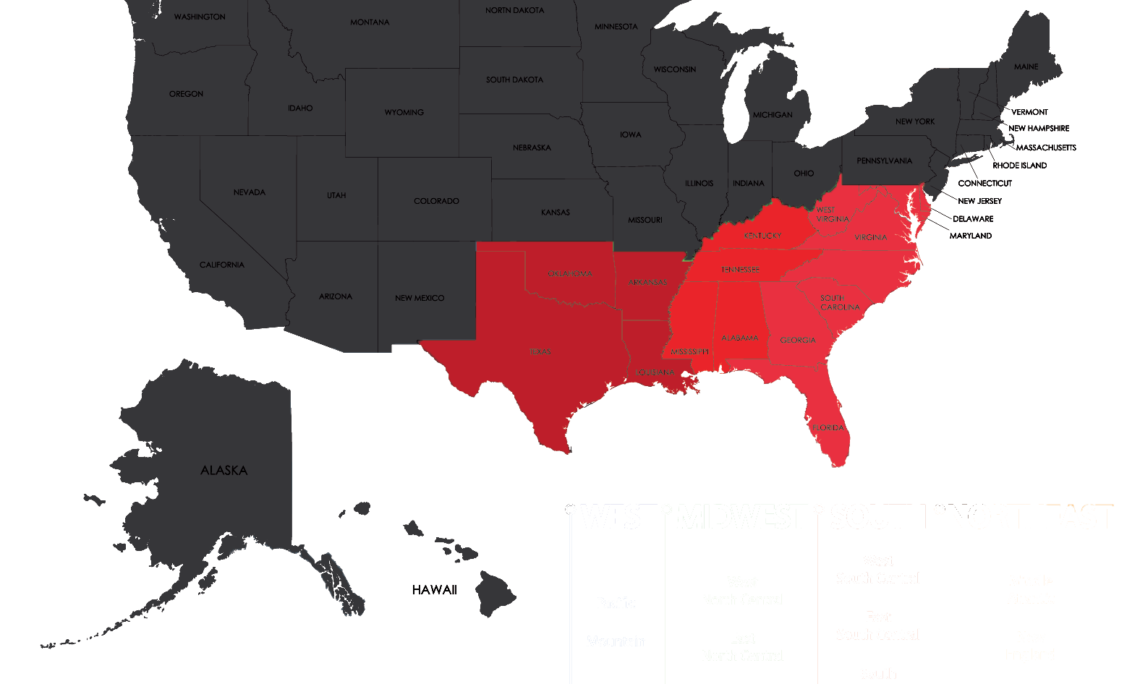 The South is perhaps the most distinctive and colorful American region.Especially in coastal areas, southern settlers grew wealthy by raising and selling cotton and tobacco.

Known as the Heart of Dixie, Alabama became the 22nd state in 1819.

With the state motto of “Liberty and Independence,” it’s no surprise that Delaware was the first of the original 13 states of the Union; it’s often called the “First” or “Diamond State.”

Called the “Sunshine State,” Florida is known for its balmy, sunny weather and beautiful beaches.

Daniel Boone and other frontiersmen settled in Kentucky, the “Bluegrass State,” in 1769.

Situated in the Deep South, Louisiana, the “Pelican State,” has a colorful history and was named in honor of King Louis XIV.

One of the original 13 states to join the Union (in 1788), Maryland is in the middle of the Eastern Seaboard.

Spelling the name of this state out loud is a catchy way to remember it, and a way to make sure you spell it correctly.

The first European settlement in North Carolina is the famous Lost Colony of Roanoke Island that vanished sometime after 1587.

Settled by the English in 1670, South Carolina was based on a plantation culture with an aristocratic, wealthy society that was dependent on black slave labor.

Called the “Volunteer State,” Tennessee became the 16th state of the Union in 1796.

The Republic of Texas achieved its independence from Mexico in 1836, the same year as the famous siege of the Alamo in which pioneers Jim Bowie and Davy Crockett were slain.

The Virginia Company founded the first permanent English colony at Jamestown in 1607.

In 1861, Virginians in the northwestern part of the state defied Virginia’s secession from the United States.