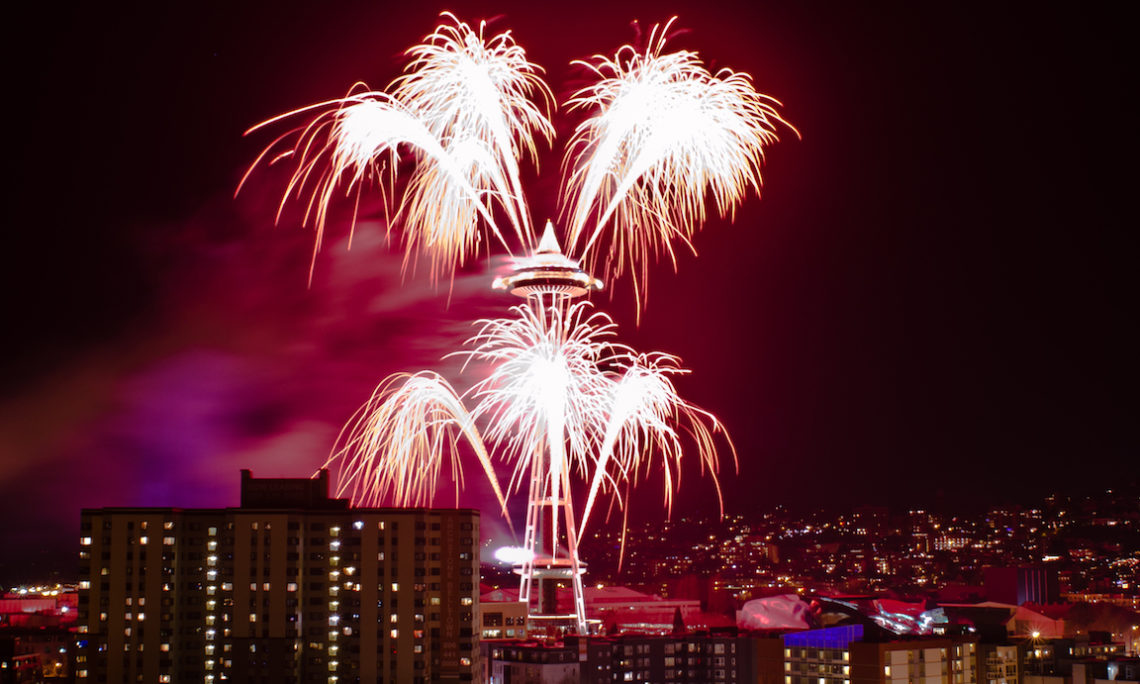 In the United States, people begin celebrating the New Year on December 31, New Years Eve. Read about the traditions surrounding this holiday and how many Americans celebrate it.

I N THE UNITED STATES, people begin celebrating the new year on December 31, New Year’s Eve. Many people have parties, and sometimes masquerade balls, where guests dress up in costume and cover their faces with masks to hide their identity. According to an old tradition, guests unmask, or remove their masks, at midnight.

Many people enjoy the tradition of watching the New Year’s festivities in Times Square in the heart of New York City. This celebration is telecast live on news channels across the nation. Traditionally, at one minute before midnight, a lighted ball begins to drop slowly from the top of a pole that is attached to a building. As the ball drops, all the people in Times Square—and many television viewers as well—count down the final minute of the year. At the stroke of midnight, the ball reaches the bottom of the pole, and a huge “Happy New Year” sign lights up. Then Times Square is filled with cheers and noisemakers. Confetti is dropped from windows above, and revelers hug, kiss, and wish each other a “Happy New Year!”

The tradition of counting down the last minute or final seconds of the year is a highlight of New Year’s Eve, not only in Times Square, but at parties and get togethers throughout the nation. The excitement grows as partygoers watch the clock and count 10! 9! 8! 7!  6!…and shout “Happy New Year!!” at exactly midnight, heralding in the new year.

Some towns and cities host a “First Night” celebration, a large community street party featuring food, music, and other entertainment. First Night parties provide a safe and, often, alcohol free environment for people of all ages to socialize, celebrate, and “ring in the New Year” together.

At New Year’s Eve parties, people often sing a traditional Scottish song, “Auld Lang Syne,” just after the clock strikes midnight and the cheers of “Happy New Year” subside. Auld Lang Syne was written in the 18th century by the Scottish poet Robert Burns, and may be based on an earlier poem by another Scottish poet. The expression “auld lang syne” means “the old days gone by.”