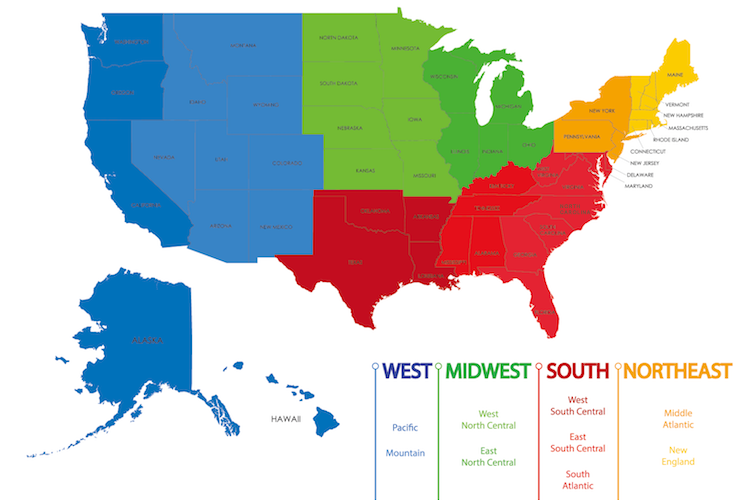 The Six Regions of the United States :

New England has played a dominant role in American history. Until well into the 19th century, New England was the country’s cultural and economic center. The earliest European settlers of New England were English Protestants who came in search of religious liberty. They gave the region its distinctive political format — town meetings (an outgrowth of meetings held by church elders) in which citizens gathered to discuss issues of the day. Town meetings still function in many New England communities today and have been revived as a form of dialogue in the national political arena. New England is also important for the cultural contribution it has made to the nation. The critic Van Wyck Brooks called the creation of a distinctive American literature, in the first half of the 19th century, “the flowering of New England.” Education is another of the region’s strongest legacies. The cluster of top-ranking universities and colleges in New England – including Harvard, Yale, Brown, Dartmouth, Wellesley, Smith, Williams, Amherst, and Wesleyan – is unequaled by any other region. America’s first college, Harvard, was founded at Cambridge, Massachusetts in 1636. Without, however, large expanses of rich farmland or a mild climate, generations of exasperated New England farmers declared that the chief product of their land was stones. By 1750, many settlers had turned from farming to other pursuits. In their business dealings, New Englanders gained a reputation for hard work, shrewdness, thrift, and ingenuity.

If New England provided the brains and dollars for 19th-century American expansion, the Mid-Atlantic states provided the muscle. The region’s largest states, New York and Pennsylvania, became centers of heavy industry (iron, glass, and steel). The Mid-Atlantic region was settled by a wider range of people than New England. Into this area of industry, came millions of Europeans who made of it what became known as the “melting pot.” As heavy industry spread throughout the region, rivers such as the Hudson and Delaware were transformed into vital shipping lanes. Cities on waterways, New York on the Hudson, Philadelphia on the Delaware, Baltimore on Chesapeake Bay, grew dramatically. New York is still the nation’s largest city, its financial hub, and its cultural center. But even today, the visitor who expects only factories and crowded cities is surprised. In the Mid-Atlantic, there are more wooded hills than factory chimneys, more fields than concrete roads, and more farmhouses than office buildings.

The South is perhaps the most distinctive region of the United States region. The American Civil War (1861-65) devastated the Old South socially and economically. Slavery was the issue that divided North and South. To northerners, it was immoral; to southerners, it was integral to their way of life and their plantation system of agriculture. The scars left by the war took decades to heal. The abolition of slavery failed to provide African Americans with political or economic equality; and it took a long, concerted effort to end segregation. The “New South” has evolved into a manufacturing region and high-rise buildings crowd the skylines of such cities as Atlanta and Little Rock. The region however still has many landscapes to delight the human sense of poetry and wonder. The region is blessed with plentiful rainfall and a mild climate. Crops grow easily in its soil and can be grown without frost for at least six months of the year. Owing to its mild weather, the South has become a mecca for retirees from other regions.

The Midwest is known as the nation’s “breadbasket.” The fertile soil of the region makes it possible for farmers to produce abundant harvests of cereal crops such as wheat, oats, and corn. Corn is the most important of all American crops, as basic to American agriculture as iron is to American industry. The annual crop is greater than the nation’s yield of wheat, rice and other grains combined. On hot, still midsummer nights in the Corn Belt, farmers insist they can hear the corn growing.

Farms are normally located separate from each other, close to the fields, and often beyond the sight of its neighbors. The village or town is principally a place where the farm family travels to buy supplies, to attend church and to go for entertainment or political, social or business meetings. Midwesterners are praised as being open, friendly, and straightforward. Their politics tend to be cautious, but the caution is sometimes peppered with protest.

The Southwest is drier than the adjoining Midwest in weather. The population is less dense and, with strong Spanish-American and Native-American components, more ethnically varied than neighboring areas. Outside the cities, the region is a land of open spaces, much of which is desert. The magnificent Grand Canyon is located in this region, as is Monument Valley, the starkly beautiful backdrop for many western movies. Monument Valley is within the Navajo Reservation, home of the most populous American Indian tribe. To the south and east, lie dozens of other Indian reservations, including those of the Hopi, Zuni, and Apache tribes. Parts of the Southwest once belonged to Mexico. The United States obtained this land following the Mexican-American War of 1846-48.

The population in the region is growing rapidly. Arizona, for example, now rivals the southern states as a destination for retired Americans in search of a warm climate. Since the last third of the 19th century, the immense stretch of barren American desert has been growing smaller. In the 1860s, the wasteland extended from the Mississippi Valley almost to the Pacific Coast. But settlers learned that the prairies could grow corn and that the grasslands could feed cattle and sheep or yield wheat. As they continued to cultivate the desert, its size decreased. Dams on the Colorado and other rivers and aqueducts have brought water to the once small towns of Las Vegas, Nevada, Phoenix, Arizona, and Albuquerque, New Mexico, allowing them to become metropolises.

Americans have long regarded the West as the last frontier. Yet California has a history of European settlement older than that of most midwestern states. Spanish priests founded missions along the California coast a few years before the outbreak of the American Revolution. In the 19th century, California and Oregon entered the Union ahead of many states to the east.

The West is a region of scenic beauty on a grand scale. In much of the West, the population is sparse and the federal government owns and manages millions of hectares of undeveloped land. Americans use these areas for recreational and commercial activities, such as fishing, camping, hiking, boating, grazing, lumbering, and mining. In recent years, some local residents who earn their livelihoods on federal property have come into conflict with the government agencies, which are charged with keeping land use within environmentally acceptable limits.

Hawaii is the only state in the union in which Asian Americans are the largest ethnic group. Beginning in the 1980s, large numbers of Asians have also settled in California. Los Angeles – and Southern California as a whole – bears the stamp of its large Mexican-American population. Now the second largest city in the nation, Los Angeles is best known as the home of the Hollywood film industry. Fueled by the growth of Los Angeles and the “Silicon Valley” area near San Jose, California has become the most populous of all the states. Perhaps because so many westerners have moved there from other regions to make a new start, Western cities are known for their tolerance and a very strong “live-and-let-live” attitude.