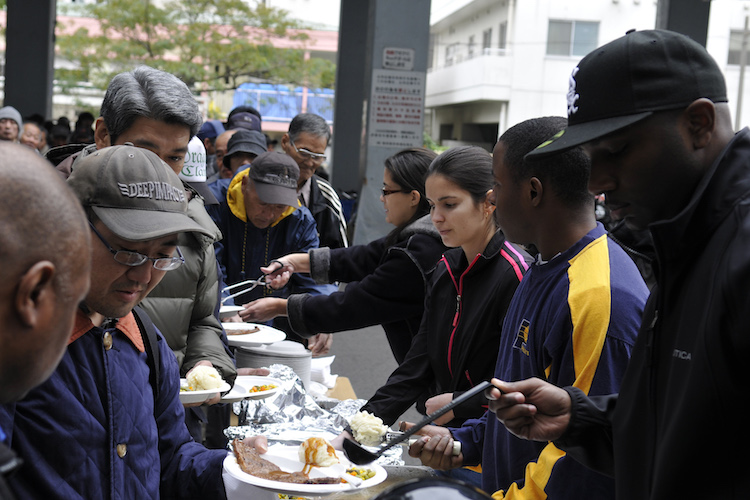 Traditionally in America, helping the poor was a matter for private charity or local government. Arriving immigrants depended mainly on predecessors from their homeland to help them start a new life. In the late 19th and early 20th centuries, several European nations instituted public-welfare programs. But such a movement was slow to take hold in the United States because the rapid pace of industrialization and the ready availability of farmland seemed to confirm the belief that anyone who was willing to work could find a job.

The Great Depression, which began in 1929, shattered that belief. For the first time in history, substantial numbers of Americans were out of work because of the widespread

failures of banks and businesses.

Within days after taking office as president in 1932, Franklin D. Roosevelt proposed recovery and reform legislation to the U.S. Congress. Most of the programs started during the Depression era were temporary relief measures, but one of the programs — Social Security — has become an American institution. Paid for by deductions from the paychecks of working people, Social Security ensures that retired persons receive a modest monthly income and also provides unemployment insurance, disability insurance, and other forms of assistance.

Recently, there has been concern that the Social Security fund may not have enough money to fulfill its obligations in the 21st century, when the population of elderly Americans is expected to increase dramatically. Policy-makers have proposed various ways to make up the anticipated deficit, but a long-term solution is still being debated.

In the years since Roosevelt, other American presidents, particularly Lyndon Johnson in the 1960s, have established assistance programs. These include Medicaid and Medicare, which are discussed in the “Health Care” Section; food stamps, certificates that people can use to purchase food; and public housing, which is built at federal expense and made available to persons with low incomes.

In 2001, a family of four with a yearly income of $17,960 or less was considered poor by American standards (U.S. Census Bureau. Poverty Thresholds 2001); 9.2 % of American families fell into this category, a decrease from a rate of 12.3 % in 1993. (U.S. Census Bureau. Historial Poverty Tables) In addition to the benefits discussed above, many families below the poverty line receive welfare payments, sums of money provided by the government each month to those whose income is too low to obtain such necessities as food, clothing, and shelter.

The most common form of welfare payment has been through a program called Aid to Families With Dependent Children (AFDC). Originally designed to help children whose fathers had died, AFDC evolved into the main source of regular income for millions of poor American families. Certain aspects of the American welfare system — especially AFDC payments — came under criticism in the 1980s and 1990s, and the system itself became an issue in national elections. In his 1992 presidential campaign, for example, then-Governor Bill Clinton promised to “end welfare as we know it.” The charge that social programs tend to trap the poor in dependency led to the 1996 redesign of certain federal programs. A new law overhauled welfare by replacing AFDC with state-run assistance programs financed by federal grants (TANF- Temporary Assistance for Needy Families). The law also limits lifetime welfare assistance to five years, requires most able-bodied adults to work after two years on welfare, eliminates welfare benefits for legal immigrants who have not become U.S. citizens, and limits food stamps to a period of three months unless the recipients are working.

The total cost of all federal assistance programs — including Social Security, Medicare, Medicaid, and various welfare programs — accounts for nearly one-half of all money spent by the federal government. That is a doubling of the percentage that obtained in the 1960s.

Needy Americans can also turn to sources other than government for help. A broad spectrum of private charities and voluntary organizations is available. Volunteerism is on the rise in the United States, especially among retired persons. It is estimated that almost 50 percent of Americans over age 18 do volunteer work, and nearly 75 percent of U.S. households contribute money to charity.