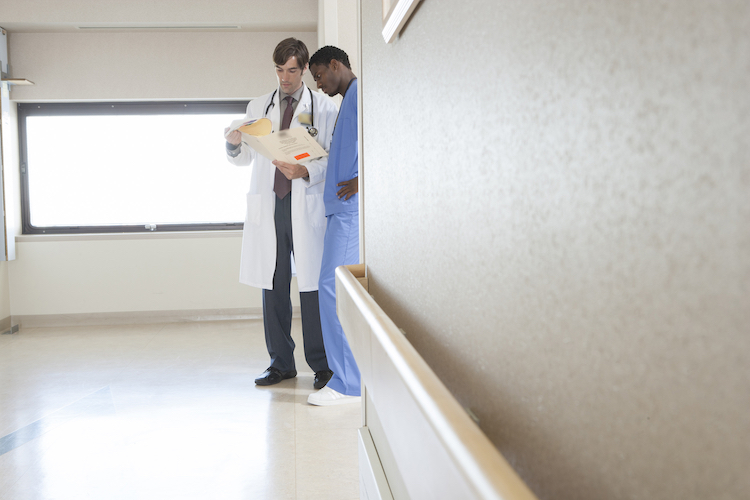 The United States has evolved a mixed system of private and public responsibility for health care. The vast majority of Americans pay some portion of their medical bills through insurance obtained at work. About five out of six American workers, along with their families, are covered by group health insurance plans, paid for either jointly by the employer and employee or by the employee alone. Under the most common type of plan, the employee pays a monthly premium, or fee. In return, the insurance company pays a percentage of the employee’s medical costs above a small amount known as a deductible. Insurance plans vary considerably. Some include coverage for dental work and others for mental health counseling and therapy; others do not.

Another type of health care plan available to many workers is the health maintenance organization (HMO). An HMO is staffed by a group of physicians who provide all of a person’s medical care for a set fee paid in advance. HMOs emphasize preventive care because the HMO must pay the bill when a person needs services that the HMO cannot provide, such as specialized treatment, surgery, or hospitalization. HMOs have grown in popularity and are widely viewed as a means of holding down medical costs. Some Americans, however, are wary of HMOs because they limit the patient’s freedom to choose his or her doctor.

Meanwhile, American physicians have helped slow the increase in costs by reassessing the need for hospitalization. Many surgical procedures that once involved staying in a hospital, for example, are now performed on an “out-patient” basis (the patient comes to the hospital for part of the day and returns home at night). Even when a hospital stay is prescribed, it is typically shorter than in the past.

Although most Americans have some form of private health insurance, some people cannot afford insurance. They can get medical coverage through two social programs established in 1965. Medicaid is a joint federal-state program that funds medical care for the poor. The requirements for receiving Medicaid and the scope of care available vary widely from state to state. At a cost of $194.7 billion in the year 2000, Medicaid is the nation’s largest social-welfare program. Medicare, another form of federal health insurance, pays a large part of the medical bills incurred by Americans who are 65 and older or who are disabled, regardless of age. Medicare is financed by a portion of the Social Security tax, by premiums paid by recipients, and by federal funds. Everyone who receives Social Security payments is covered by Medicare.

One of the most troubling health care problems facing the United States has been providing care for those who cannot afford health insurance and who are not eligible for either Medicaid or Medicare. It has been estimated that one in seven Americans is without health insurance at least part of the year. They may be persons who are unemployed or have jobs without medical coverage or who live just above the poverty line. They can go to public hospitals, where they will get treatment in an emergency, but they often fail to obtain routine care that might prevent illness. After widespread discussion and debate across the country and at all levels of the citizenry, in 1996 Congress passed legislation designed to make health insurance more available to working families and their children. The law expanded access to health insurance for workers who lose their jobs or who apply for insurance with a pre-existing medical condition, and it sets up a pilot program of tax-deferred savings accounts for use in paying medical bills.

The latest reform idea, the “patient’s bill of rights,” would authorize managed care patients to see a specialist if they want, have emergency treatment at any hospital and to appeal any HMO’s denial of coverage. At least 40 states have passed some version of these laws, and federal regulations give similar rights to the 80 million Americans covered by Medicare and Medicaid.